text of salutation in Ludwigshafen celebration  of TKP/ml 11 May
from PCm Italy for pubblication and reading also in others celebrations
PCm Italy. 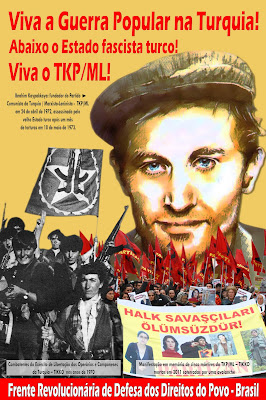 We Italian communists, heirs of the great communist tradition of our
country,

We Italian Maoists, committed today to carry forward the construction of the
Maoist communist party, in the fire of class struggle and closely linked
with the masses,

We raise today our red flags to salute with recognizing and emotion the 40th
anniversary of Ibrahim Kappakkaya's martyrdom!

His name, in Turkey as in the world, means Great Cultural Proletarian
Revolution, cause of the working class, path and universality of the
People's War.

We are confident that Turkish communists who persist based on his example
and teachings will reach the goal for which Ibrahim Kayppakkaya gave his
life: the revolution in Turkey, the national and social liberation of
Kurdish people, oppressed by the capitalist, feudal, fascist bourgeoisie,
lackey of imperialism

The Marxist-Leninist-Maoists of the world found in Ibrahim Kayppakkaya the
example of a Maoist who, grasping Marxism-Leninism-Maoism, applied on his
country the strategy of People's War, as other Maoist leaders of our
movement did and do in the respective countries.

Today all these teachings should serve the great cause of e new unity of
Marxist-Leninist-Maoists towards a new international organization, along the
road to a new Communist International, for communism and socialism.