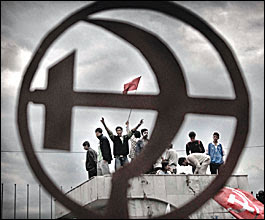 For more information on Revolution in Nepal, please link up to the following web sites:
http://groups.yahoo.com/group/MAOIST_REVOLUTION/

Evaluation of the Nepal situation and international influence in theInternational Comunist movement.The theoretical and pratical lessons of Communist Party Of Nepal (Maoist)and theexperiences.
Maoist Communist Party Of Italy (PCm Italy)From the highest top of the world a red banner shines victorious.It's the flag of Maoism. It's the flag of people's war and of the politicalstruggle guided by Communist Party of Nepal (Maoist).It's a call to proletarians and peoples of the world to see that another path ispossible. To win is possible!
The extraordinary electoral success of the Maoists in Nepal frightensimperialists and their media all over the world.
The people's war in Nepal, from the USA imperialism inserted in theirproscription lists as "terrorist threats" so far, has demonstrated to be able towin first of all on the military terrain conquering 80% of the territory,smashing the reactionary army guided by the dictatorialmonarchical regime sustained by world imperialism and Indian hegemonism; then tobe able to win also on the electoral terrain, smashing all other parties puttogether, from the monarchical extreme right to the phoney 'communist' left,basing itself on the masses, youth, women, working class and its massorganizations.

A People's Liberation Army, a united front, an authentic communist party guidedby Marxism-Leninism- Maoism applied to the concretereality, has till now performed a miracle, in the sphere of an imperialistsystem which leads an infinity war against the peoples of the world and in theambit of a country pressed between the two emerging powers, India and China.
The Communist Party of Nepal (Maoist) guided by comrade Prachanda, bearing inmind the experiences of the anti imperialist struggle and people's war - hasinnovated in war, politics, organization, the implementation ofMarxism-Leninism- Maoism, and achieved a first great result, the strategic andtactical lessons of which are useful and important for all genuine communists inthe world.We communist proletarians engaged in the construction of the Communist MaoistParty in Italy are always a part of the Revolutionary Internationalist Movement(RIM)of which the Communist Party of Nepal(Maoist) is a leading component, and weare proud to have been those who, totally in countertendency with reformist,revisionist and phoney parties, so as with the leading politicalanti-globalization ranks, have supported and tried to let know the people's warin Nepal, the advanced, sophisticated, profoundelaboration of CPN(Maoist) - let the people know the extraordinary role of womenthrough the elaboration of comrade Parvati - the role played also at aninternational level of the Nepalese revolution in south Asia, with thedevelopment of people's war in the heart of the Indian giant.The current results of the Maoists in Nepal encourage and inspire us in applyingthe different conditions of an imperialist country, the theory of theproletarian revolution.
Now it is necessary to support the Nepalese revolution in a much more strong anddetermined way in front of US imperialism and of India and China powers plans tostop it, to domesticate and stifle it, but above all it is necessary to call oncommunists, advanced proletarians and anti-imperialists to know, to analysethoroughly, to measure themselves with the advance of Maoism in Nepal.
This international seminar will be in english, french and italian languages isopen all M.L.M organisation and parties in the world and particularly in Europe(european parties and organisations) , open to allbranches of the World PeoplesResistance Movement (wprm) and solidarity commitees supporting NepaleseRevolution.
Proletari Comunisti (Communist Worker)- International Seminar
Publicado por dazibao rojo en 8:11 p. m.