INDIA: 2-2-22 marks the 12th Martyrdom of Comrade Swapan Dasgupta, The first Political Prisoner to die as a UA(P)A prisoner in custody! 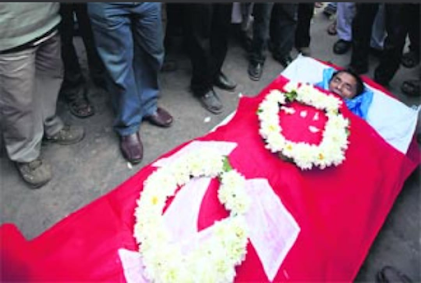 Who murdered this Comrade even before his trial started? Who was responsible for this state-sponsored institutional murder? The ones who shed crocodile tears for Fr. Stan Swamy, CPI (M) murdered Swapan Dasgupta. CPI (M) Government of West Bengal led by Buddhadeb Bhattacharjee arrested Bangla People's March Editor, Swapan Dasgupta on 6 October 2009. Swapan was arrested by the Special task force attached to the Kolkata Special Branch police at night after his house was raided.
He was kept in the Police stations for 28 days and was subjected to mental torture and continuous interrogation without any break. Swapan who was 60 years old at that time was forced to sleep on the cold floor without any mat or blanket in the cold weather despite being informed about being an asthma patient. On November 3 2009, he was sent to Presidency jail and his relatives and comrades came to know that he was taken to hospital following the physical and mental torture faced by him. On 17th December, he was admitted to SSKM hospital with asthma and respiratory troubles and doctors also confirmed that he was suffering from leprosy and Blood cancer.
Swapan Das was left uncared in the general ward for which the State Government, State Police and jail authorities were also responsible. Even the hospital authorities blamed jail authorities and state government for negligence and many social scientists, academics, social activists blamed the state as he was not provided with the necessary medical attention including blood transfusions. Swapan's condition deteriorated and was shifted to ICU on January 30 was kept on a ventilator. At 5 am on February 2 2010 Swapan Dasgupta was murdered at the age of 61 just like Fr. Stan Swamy was killed.
Swapan who started Bangla People's March in 2004 has a valid press registration number—-WB BEN/2004/15681, and It was not banned in Bengal. Swapan who worked as a Personal assistant to the Collector of Central Excise in orrisa was part of CPI and later CPI(M) during his young days. When the Spring Thunder shook the Indian government, he embraced Naxalism and joined CPI (ML) groups which later unified as CPI (Maoist). Police didn't have any evidence him of being a member of CPI Maoist but arrested him just for having dissent against the Indian ruling class in which CPI(M) is also part.
Usage of UA(P)A is not only practised by Bengal CPI(M) also by Kerala CPI(M) government. Journalist and Editor of People's March English, Comrade Govindankutty was arrested under UA(P)A by CPI(M) government of VS Achuthanandan in 2007 making him the 1st Journalist and Marxist to be arrested under UA(P)A in Kerala and his case the 2nd UA(P)A case in Kerala. Till now the chargesheet is not even filed against him by the police.
Even now in Bengal and Kerala, there are UA(P)A Prisoners who were arrested by CPI (M) government. Those UA(P)A cases and UA(P)A on Sharjeel Imam, Umar Khalid, Fathima Gulfisha, Sidheeq Kappan, Bhima Koregaon Political Prisoners are NOT different. If you are against the draconian - anti-Democratic law, UA(P)A, clench the fist against the ruling class and all the parliamentary parties!
Repeal UA(P)A!
Quash All UA(P)A cases!
Release all Political Prisoners!
Rise up against the parliamentary - revisionist parties that fake as Anti Fascist parties!
#ComradeSwapanDasgupta
#Swapan_Dasgupta #PeoplesMarch #CPIM #UAPA #BuddhadebBhattacharjee
Publicado por dazibao rojo en 10:53 p. m.