INTERNACIONAL: International Meeting of ICSPWI has been successfull and carry on the Proletarian Internationalism in the world 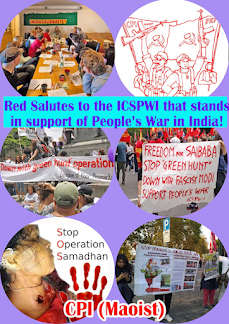 The meeting of the International Committee in Support of the People’s War in India was successful. Having being prepared with care and invitations, in full safety, it achieved its immediate goals: a strong development and continuation of the campaigns of support of the people’s war and for the unconditional release of the political prisoners, and set the future tasks for building Committees in the largest number of countries and raising the level of their unity and ability to mobilize communists, revolutionaries, anti-imperialists, proletarians and masses.

The meeting began with the singing of the International and the greeting to the Indian masses, the Communist Party of India (Maoist), the martyrs of the revolution and the political and war prisoners in the jails of the fascist and genocidal Modi’s regime.

It was followed by a message from the CPI (Maoist) to the meeting, in which all the attending forces were thanked and greeted. The message noted: “It is extremely comforting to know that the meeting will decide new days of struggle, new initiatives of solidarity and will strengthen the bond between the Committees of the various countries and the people’s war led by the Maoists…. On November 24, the new beginning of the international campaign, let’s take it to new heights”. Then it pointed out…” the intensification of the fundamental contradictions, the goal of the proletarian and international revolution to establish socialism/communism, the tasks of the international communist movement to work for its unity, fighting all forms of revisionism, especially the new synthesis of Avakian and that of Prachanda/Battarai”…

Some important dates were indicated for the Indian masses and the people’s war, to be discussed when planning new initiatives.

Strengthened by this message, the meeting began with the introduction by ICSPWI Italy, which chaired the meeting together with the ICSPWI Galicia, which resumed the history and the report of the 24th november’s IDA and explained the agenda: to overcome the ideological, political and organizational limitations, raise the struggle against …, give strength and continuity to the campaign by organizing…

The comrades from ICSPWI Galicia entered into the merits of the new tasks: raising propaganda and cultural war with a call to musicians and artists, realizar CD, concerts etc …, deploying more forces with initiatives at the embassies, first of all in Europe, proposing demonstrations in Madrid the April 9, in Rome the July 1 and in Brussels the November 24.

The meeting continued alternating speeches of the attending forces involved in the campaign and messages from other Commitees, Parties and Organisations from all over the world who could take part.

The comrades of the TKP/ML stated: “On behalf of our Party we are here to support the people’s war in India and we believe that this meeting will mark an important step in international solidarity. There is resistance and war against imperialism in the world in revolt and struggle for the international defense of the proletariat. The people’s war in India is the struggle of the international proletariat. The people’s guerrilla warfare in India is part of the class warfare. All peoples’ struggles are legitimate, just and will win.”

The Support Committee in Tunisia informed that the ICSPWI Tunisia has been working for some years and “ the 24th november’s IDA was an opportunity to resume this activity and to make our contribution and to extend it in Arab world… we make propaganda and statements to certain masses in struggle in the rural regionof across the country and to students and university professors.. we also forming an Arab Committee to defend the Revolution in India among the intellectuals of 7 Arab countries… we work for involving others revolutionary, democratic and progressive forces, denoncing also the links between the Zionist regime and Modi in terms of military cooperation and intelligence.. and for extending activitywith farmers of the oasis of Jemna.. we support the proposal to organize initiatives at the Indian Embassy..
..
The Austrian Committee, after greeting those present, stated that the Indian GP is not just for India. We are facing an explosion of the proletarian and popular masses in all countries. The campaign in support of the PW should also be a campaign to defend MLM as guide of the world proletarian revolution, as chairman Gonzalo defined it.

In Austria actions were carried out in industrial areas, among women and meetings. A campaign for the twenty years of the PLGA is going on. It has been said that we need to build a link between the Committees and the growth of their political viability. We believe that coordination is not enough but political and ideological debate is also needed. We need to be internationally coordinated with common materials. We propose a Day of struggle on March for the release of political prisoners .

The comrade from PC(m) Afghanistan said that the GP in India led by the CPI(Maoist) is the advanced point of the fight against the rotten imperialist system. The struggle of the Indian workers, peasants and masses is to overthrow the bourgeois and bureaucratic dictatorship in India and to establish a New Democratic and Socialist society. The reactionaries and the imperialist powers help Modi’s fascism and his machine against the PW in India which aroused enthusiasm and hope among the oppressed masses, proletarians and communists all over the world. The PW in India is advancing against all these obstacles, and it is the duty of all communists, of the proletarians, to support the just war of the masses in India.

The international proletariat must define practical plans to intensify and expand solidarity with the PW in India.

The French comrades of ‘La cause du peuple’ said: “the PW in India led by the Maoists is an immense ispiration for all revolutionaries in Europe and an exemplary light that illuminates the road for world revolution…we share the idea that international support does not come only in words but in actions… Our party has always worked for this support.. this began when our comrade Pierre was still alive..the biggest and most important internationalist task is to combat and destroy french imperialism.. We wish to work further and more closely with you (ICSPWI) for this most important campaign..

As conclusion of the first day, the Committee stated that all the proposals put forward were to be discussed and adopted together. The announcement of the work for the formation of new Committees in other countries was welcomed and it was stressed the importance that the new internationalist solidarity campaigns have the objective of gathering the masses and all those in solidarity, according to the conditions in the different countries. The proposals must reflect and collect the indications coming from the PW and the CPI(Maoist), and the debate, including on political and ideological issues, must be aimed at realizing them.

We have to extend the Committees, make them a material force, bring tens of thousands of people to the streets, because we are a sort of second front of the PW in India.

It is right to strengthen the coordination of the Committees, to help each other to better serve the PW in India and the world revolution.

While the first day of the ICSPWI meeting was being held, Indian workers, youth and students took part in a meeting in Bergamo and gave life to a strong and combative demonstration in front of the consulate in Milan, burning portraits of the fascist and genocidal Modi, claiming the freedom of all political prisoners in India and supporting the ICSPWI campaigns.

The second day, the meeting resumed by reading a letter by CPI (Maoist) providing information about the situation of political prisoners in India and the need to intensify in all forms the campaign to protect them and for their release.

Then the debate went on with a new round of speeches of the attending forces in order to make decisions together on how to continue the international campaign.

Consequently, it was decided:

– on February 10 an international poster in defense of the PW and for expansion and strengthening of the organs of people’s power, the people’s revolutionary committees;

– on March 23- in support of the struggles against imperialist exploitation and oppression in the world and the launch of the international campaign for the release of political prisoners as a protracted campaign, culminating in an International Day of Action on 13 September.

– in the next time it will be launched call for initiatives at the Indian embassies in Madrid, Tunis, Vienna, Rome, Brussels,, etc.

– for the general strike in India, welcomed and supported by the PCI (Maoist), called on 28/29 of March was greeted and it was decided to develop information, solidarity and common struggle of workers in all countries where there are Committees and international campaigns are developed.

The TKP/ML proposed a message of greeting fr the 50th anniversary of their Party and in support of political prisoners not only in India but in Turkey and all around the world. For this in the 18 March is organized an international Day for ‘Freedom for all revolutionaries and communist prisoners’ with demos in Vienna,Zurich, Frankfurt, Strasburg and Bruxelles.

The proposals were accepted.

The Italian comrades MFPR (Revolutionary Proletarian Feminist Movement), integral part of ICSPWI Italy, gave their support to the proposals, informed about the large work in support of Indian women in struggle and in arms carried out the November 24 and in the huge demonstration of 100 thousand women that took place in Rome on November 27, continuing with the preparation for March 8, when there will be a nationalwide initiative with the spreading of the pamphlet “Women in prison” translated into Italian.

The meeting endedi in an atmosphere of unity and with the commitment to strengthen the support.

– Letters of Abhay for the campaign ‘release all political prisoners..