INDIA: Punjab Bandh: Masses of Punjab write a new chapter in resistance against tyranny of Imperialism — by Harsh Thakor 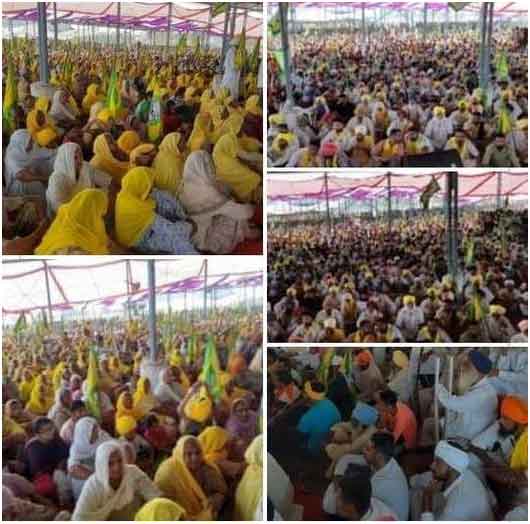 The state of Punjab rose to the occasion in resurrecting the spirit of immortal martyr Bhagat Singh on September 28th.Commemoration conferences or rallies engulfed the whole state shimmering the spark of the ideology of Bhagat Singh in context of the Imperialist policies enslaving the whole population.

It is ironical that the homage assemblies coincided with one of the most impactful bandhs ever carried out in the history of Punjab on September 25th.The present wave is literally writing a new chapter in the history of Punjab. The atmosphere was reminiscent of lightning engulfing every area comprising every part of the society. What was remarkable was how every section of the society was galvanised to the optimum be it peasants, agricultural labourers, teachers, students, youth, women or industrial workers. The scene in the Malwa belt was similar to an army waging a war with people’s wrath at its zenith. This region comprised districts like Sangrur, Faridkot, Bathinda ,Patiala, Ludhiana, Malout, Mansa and Muktsar The rulers were struck at their very chord. Rarely have people in Punjab brimmed with such confidence as here. The-unity of so many revolutionary and progressive streams was also heartening. An adjective is hard to find to do complete justice to the intensity of the protestors whether obstructing the traffic or blocking the rail roads. The event was in striking contrast to the practice of the ruling class parties like Akali Dal or Aam Admi Party who also condemned the bills. All the 31 participating groups exposed the nefarious nature of the opposition parties and pledged not to have any truck with them. In Gaggarpur village of Bhawanigarh region the BKU(Ugrahan) literally took the rulers to ransom.

The struggle blended the planning of an architect with the fury of a boxer and the craft of a surgeon. What has come to light is how imperialism has penetrated every sphere of society. and semi-feudal opression in agriculture is determined by it. Articulate planning has been done to chalk out protest areas by participants. The most remarkable feature was the implementation of the mass line in taking democratic fervour to simmer at its boiling point with the very core of the soul touched of every person.

In Khatkar Kalan the Punjab Students Union and the Naujwan Bharat Sabha mobilised around 2000 youth and students in a rally and conference on 28th September. Thousands of youths took a pledge on the occasion of Shaheed Bhagat Singh’s birthday.

1) The ongoing scheme against agricultural bills will be taken full loudly until the bills are returned.

2) BJP and R in Punjab. Ace. The offices of the A.S. and the homes of the leaders will be surrounded.

4) Shaheed Bhagat Singh and his colleagues will make a museum and library by leaving illegal occupation at a secret place located in Ferozepur.

The Punjab Radical students union held a film show educating the youth about the relevance of Bhagat Singh in context of saffron fascism prevailing today.

Commemorating Shaheed Bhagat Singh’s birthday, The Bharatiya Kisan Union (Ugrahan) garnered the maximum forces creating the crescendo of an inferno at Longowal in Sangrur.15000 persons were mobilized, including around 11000 youth. Rallies were also organized in Buttar (Moga), Jaito (Faridkot), Ber Kalan (Ludhiana) and Mattenangal (Amritsar)The speakers touched all the burning issues of the day. There was tremendous participation of Women which was heartening. At the very core the anti-people essence of the agricultural bills was summed up connecting it to the offensive of globalization as a whole and ascendancy of Hindutva fascism. In particular the policies of Narendra Modi were attacked. The speakers adopted the language of the common people in the manner Bhagat Singh did and made a perfect liason between the policies and the day to day lives of the masses.BKU(Ugrahan) secretary Sukhdev Singh Kokri Kalan said that over ten thousand farmers, including a large number of women and thousands of youth, joined the gathering.

The main speakers addressing the gatherings included young boys and girls in addition to state president Joginder Singh Ugrahan, Vice President Jaswinder Singh Longowal, Harinder Kaur Bindu, Rajwinder Singh Ramnagar and district level leaders. They advised the youth to emulate Shaheed Bhagat Singh’s farmer labour-friendly revolutionary thinking. It was highlighted how Corona was used as a false pretext to block people’s struggles. A massive rail roko has been called for October 1st by all 31 organizations. The speakers invited the people to garner or channelize their justified anger. They alleged that the new offensive was an attack by Modi government to give an open licence to corporates for blindly looting in farming sector. The Modi government was patronising the loot of the Adanis and Ambanis. The leaders devised a strategy to confront the enemy at it’s very core. A plan was formulated to mobilise farming community to gherao the warehouse of Adani Group where grains are stored as well as the malls and petrol pumps of Ambani group. The speakers elaborated how such protests would confront the corporates at their very backbone and send shivers down their spines. Leaders said that the Adani Group has built large warehouse to buy grains and store them in Punjab. The laws passed would be a virtual passport to loot the grain of the farmers. Instead of distributing grains to poor families, they have to be sent to countries and abroad for big profits. The message will be rendered by the surrounding of agricultural warehouses. Farm labourers and other poor families would also show their true metal by participating in these surrounding actions. The struggle will be taken to the next stage by the surrounding businesses of big capital businesses like toll plazas, multi-company shopping malls like Wal-Mart’s Best Price etc and Pepsico. The current agitational phase will be dedicated as a protest week from today’s birth anniversary of Shaheed Bhagat Singh to the cruel day of the Moga Goli incident created by the Congress government on 5 October 1972 They invited people to join in these surrounding actions. The people were guided not to resort to any anarchy as well as maintain strict discipline and guard against enemies.