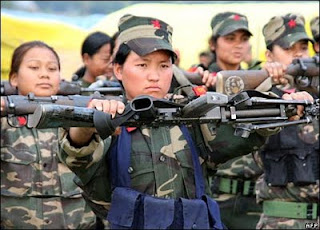 
(The design and mission of Prachanda and Baburam, who had long been planning to disarm, dissolve and liquidate the People's Army under various pretexts, have finally come to fruition. They have handed over the keys of the containers, in which weapons of the People's Liberation Army have been locked, to the Army Integration Special Committee without the consent of party's vice chairman Mohan Vaidya 'Kiran' and even without consultation with general secretary Ram Bahadur Thapa 'Badal' who is the in-charge of the party's army department. The keys of the containers have been handed over to the government against the spirit of the party's official decision. This decision is a kind of design to liquidate the PAL. We, therefore, condemn this kind of capitulationism. Following is the statement issued on behalf of revolutionaries on this issue.)


Our party has been committed to carrying the tasks of constitution writing and army integration to a meaningful conclusion in accordance with the spirit of the Comprehensive Peace Agreement (CPA). We have made it clear that both of these responsibilities have to be accomplished simultaneously. There can be no divided opinion about the fact that army integration is an important part of the peace process.  It is known to all that we have been advancing the issue of army integration with consensus.


It is also clear that the meetings of our party held at different levels and on different occasions have taken the decision to integrate the army in a dignified manner. Despite the formal decision of the party to agree on the regrouping of the PLA members only after settling the issues concerning the modality of integration and rehabilitation package, the sudden and surprise decision to hand over the keys of the containers and weapons is against the decision of the party's standing committee and central committee. This decision is a ploy to dissolve and liquidate the People's Liberation Army by disarming it.  We strongly condemn this type of decision and also appeal to all concerned people and sectors to immediately terminate this suicidal decision.