TUQUÍA: INTERNATIONAL STATEMENT: GLORY TO THE TKP/ML, THE REPRESENTATIVE OF THE MARXIST-LENINIST- MAOIST LINE OF THE INTERNATIONAL PROLETARIAT ON TURKISH SOIL ON THE OCCASION OF THE 50TH YEAR OF ITS FOUNDING AND STRUGGLE! 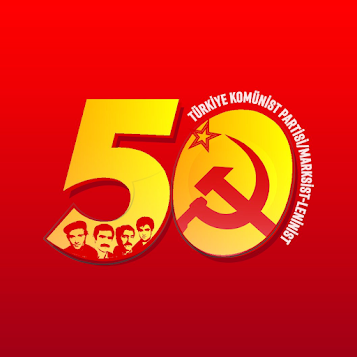 “Turkey’s future is being made from steel; perhaps we will not be there, but this steel will not forget how it was created.” (İbrahim Kaypakkaya)

The contradictions of the imperialist capitalist system are deepening and differences between imperialists are leading to unjust wars in ‘protected regions’ of Europe. The aggression of the ruling reactionary class powers towards the working class, toilers and oppressed peoples is intensifying. A clear crisis of government exists in imperialist capitalist countries. Poverty is increasing and the ecological system is being destroyed on a terrifying scale for the sake of greater profit.  It is at this historic juncture that the TKP/ML is celebrating its 50th year of struggle, having the pride and honour of being the bearer of communist ideology and its societal model.

It has been half a century since the founding in Turkey of the TKP/ML as part of the world revolution of the international proletariat. Comrade İbrahim Kaypakkaya adopted the practice and theory of the great masters of the international proletariat, comrades Marx, Engels, Lenin, Stalin and Mao, as a reference and guide, building the TKP/ML as a synthesis of all these values.

The durability of the base on which it was founded has brought into existence over half a century the rising communist line built on MLM ideological norms. The insistence on protecting and implementing the Communist line has, at the same time, ensured its uncompromising stance in face of the attacks of hostile ruling forces and all manner of revisionist aggression.

While building the ideological foundations of the TKP/ML with Maoism, the third and highest level of Marxism-Leninism, defining the process as the product of the Great Proletarian Cultural Revolution, the most advanced point of MLM and in a sense its synthesis, was also of historic significance. When describing the basis of the founding of the TKP/ML, communist leader İbrahim Kaypakkaya’s comment that: “Our Party is a product of the Great Proletarian Cultural Revolution” is concrete proof of this reality. The building of the TKP/ML on MLM consciousness has been the basis of it having the will to ‘go against the flow’, despite the decades of communist retreat that have shaken the world. The tradition created by this consciousness has been the key to it being the unhesitating bearer of unshakeable faith in the communist cause over fifty years.

At the same time, the TKP/ML has remained faithful to the words of Chairman Mao: “Political power grows out of the barrel of the gun!” and “If a people doesn’t have an army, it doesn’t have anything!”, building its class struggle on the strategy of People’s War. For this cause it has established a communist tradition based on an uncompromising opposition to class enemies, sending to immortality four party general secretaries, dozens of cadres and hundreds of militants.

This sound foundation has not only ensured insistence and continuity of the armed struggle against the ruling classes, but also made sure that broad lines were drawn against all kinds of class collaborationist theories. Not merely against attacks from outside the party, it has also waged a struggle during fifty years against those within the party who tried to deform the communist line and against deviationists who tried, by distorting the path of the party, to make the party a component of opportunist and revisionist movements. It has on every occasion demonstrated the determination to prevent such understandings becoming dominant in the party.

The TKP/ML, with its MLM line, has, as a platoon of the international proletariat’s struggle to carry out world revolution, focused on carrying out the revolution in the country in which it is situated. At the same time, it has also borne the responsibility of carrying on the struggle to realise the MLM communist line all over the world and made efforts towards this. It has applied itself towards the international communist movement establishing vanguard units on a MLM foundation. The TKP/ML is also aware that the necessity of implementing the communist line is a prerequisite, not only for itself, but also for MLM parties and organisations in order to create a communist world. International relations are established within the framework of these principles.

The TKP/ML will continue the communist line established by its founder and theoretician leader who contributed his own life and blood to the cause, until there is a New Democratic Revolution (Democratic People’s Revolution) on an MLM line and until Socialism is constructed. A half century of struggle and resistance bear witness to this. In the next period, this foundation will be maintained and the determination and unhesitating adherence to the communist line will continue. The words of Chairman Mao: “Thousands and tens of thousands of martyrs gave their lives heroically for the cause of the people before us. Let us raise their flag high and march forward on the path drawn by their blood,” will continue to be the rallying cry of our struggle and we will continue to raise on high the red flag of the international proletariat.

THE TKP/ML IS A DEPARTURE FROM A 50-YEAR SILENCE, FIFTY YEARS OF REVOLUTION AND COMMUNIST BOLDNESS!

GLORY TO THE TKP/ML’S 50TH YEAR OF STRUGGLE SINCE ITS FOUNDATION!

GLORY TO THE TKP/ML’S FOUNDER AND THEORETICIAN LEADER İBRAHİM KAYPAKKAYA!

GLORY TO THE IMMORTAL COMRADES IN THE TKP/ML’S MARCH TO COMMUNISM!

LONG LIVE THE NEW DEMOCRATIC REVOLUTION AND OUR STRUGGLE FOR SOCIALISM AND COMMUNISM!