INDIA: Dear comrades and friends of Indian Revolution abroad – from CPI (Maoist) to ICSPWI – from ICSPWI to the proletarian, antimperialist and revolutionary mouvement 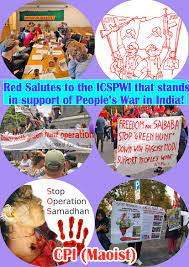 Towards new international days of actions!

Towards new Committees of Support!

Our CC conveys revolutionary greetings to all of you on your comradely solidarity to our
Indian People’s war. We have overcome the SAMADHAN operation of Indian ruling classes
with ferocious resistance from our heroic peoples’ army i.e. PLGA and revolutionary people of
our country especially belongs to country wide Maoist struggle zones, friends and all left parties
and forces of our country including well-wishers of Indian revolution. We got tremendous
support and solidarity from the International Maoist revolutionary parties and forces with great
comradely zeal and determination. The friends of Indian revolution abroad are not apart from all
these activities. We specially mention our heartfelt revolutionary greetings to ICSPWI.
The SAMADHAN operation was declared against our revolutionary movement on 17th
May of 2017 with five years stipulated time period. The Hindutva Indian ruling classes openly
declared that they will eradicate the total movement in this period. At last they have started drone
strikes in 2021 April. It was intensified in April 2022. They have used dozens of drones and tens
of bombs at a time in jungles including civilian locations (tribal hamlets). In these years they
have coined and incarcerated so many democrats, cultural artists, writers, lawyers, revolutionary
intellectuals, well-wishers of indigenous people, universities professors and even journalists as
urban Maoists. The all kinds of brutal security forces particularly state forces falsely encountered
dozens of revolutionary masses. They have arrested and incarcerated hundreds of people
through- out the country. The tribal woman is a particular sufferer of this long period from the
notorious security forces. They have raped tens of women in the struggle zones. The human
rights activist stood firmly with the struggling people and supported them to fight legally against
their atrocities. They have done each everything to eradicate the people’s movement, but they
have failed in their disasters task. In the last above five decades of long history of Indian
revolution once again it has proved that nothing can eliminate the people’s movement until the
exploitation is abolished. In this context, our party sincerely conveying its best comradely wishes
to all who supported our movement in this crucial period.
In these years we lost so many our beloved heroic comrades including central Committee
members to defend and advance the movement. They have upheld the red flag and sacrificed
their lives to the sake of our revolution. Our CC humbly bows its head and pay the tributes to
them and take pledge to fulfill their revolutionary ambitions. In these years so many red guerilla
fighters injured in the battle field fight against the bloody security forces. Our CC conveys its
greetings to them on re-joining in their duties with great determination. Our CC shares its grief
and sufferings with the martyr’s families who led their lives for sake of Indian revolution.
Comrades,
Last year on 26th Sept, Indian Home Minister notorious Hindu fascist criminal Amit Sha once
again declared to eliminate the Maoist within one year under the special military offence
campaign i.e. Prahaar-3. According to it now the police camps and stations were stocked with
bombs to pore on the jungles and villages of struggling zones with drones. This is really
terrorizing the people and thousands of people protesting it to save their lives. So, now at this
crucial juncture I appeal you to join with them and fight against drone strikes in your countries. I
request you to give a call to organize rallies and demonstrations before the Indian embassies of
your countries. This is the time to save the Indian revolution. We hope and confident that it
encourages us as under current to advance the movement.