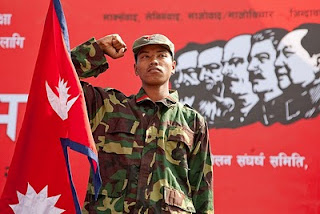 The tasks of the ongoing CC meeting
Comrade Basanta

Our party, the Unified Communist Party of Nepal (Maoist), had called its Central Committee Meeting on November 1, 2011. Chairman inaugurated the said meeting at 3 PM of the very day and some agendas were presented there. However, the meeting did not go even more than half an hour. Chairman postponed the meeting for 10 days after homage to the martyrs, the only agenda that was finished. In the inaugural statement he has put forward two things that have special meaning. First, now the line struggle has reached to its climax, we should make it reach to its conclusion. Second, this inner party struggle has not emerged as a result of differences in one or two tactical issues, but is the result of differences in overall set of tactic, i.e. line and strategy. But he has not, till now, placed any written document authentically in the party claiming his different position in the ongoing ideological and political line and strategy.

The inner party struggle of our party is not limited now within our party ranks only but has spilled out to the streets. Party’s problems are made reach to the streets, because they are very serious. Taking problems to the street is necessary and correct to the extent that it makes people aware of them and unites them on the basis of their outlook and partisanship. Nevertheless, it is party that should reach to a comprehensive synthesis of those problems. Therefore, this CC meeting is accompanied by serious challenges. They are firstly, related with establishing correct ideological, political, organisational and cultural line on the basis of Marxism-Leninism-Maoism, secondly, uniting entire party ranks on the basis of revolutionary line and thirdly, developing a comprehensive plan consistent with that line to realise People’s Federal Republic.

For the last few months and mainly in the periphery of forming government under our party’s leadership a lot of wrongs decisions have been taken in party name. Those decisions, on the one hand, are not in consistent with party’s general line, and, on the other, are not taken from any authentic body of our party. Those decisions have been taken by two leaders, party chairman and vice chairman Baburam Bhattarai, adopting wrong process and contradicting with party’s general policy. After those decisions were taken to implementation, they did not remain merely internal matters only. It became a necessity to make these issues reach to the broad masses, when the main leadership, who is responsible to defend party’s line, policy and system, does not stick by them. In this situation, Comrade Kiran and comrade Badal have shouldered the responsibility of defending party line. Now the political issues on which there are debates not only in the party but among the masses too are as follows.

Firstly, our party’s immediate political tactic is to establish People’s Federal Republic, which carries anti-feudal and anti-imperialist content. But, in the context of forming government, comrade chairman, with no notice to any other leaders, signed at mid-night a four-point deal with Madhesi parties in which he has agreed to write a constitution of democratic republic. Which committee decision authorised him to do this? By signing this deal, he stood against party’s political line of People’s Federal Republic on the one hand and violated the party system on the other. Moreover, in that very deal there is a vague sentence which reads that all the issues proposed by neighbouring countries will be resolved. In fact, it is nothing other but a support of and an indirect commitment to implementing the pending proposals by India in which she has asked Nepal to sign extradition treaty, allow stationing of Air Marshal in the Nepali airport and allow intrusion of Indian army to Nepal in the name of protecting the projects the Indian nationals own in Nepal. What does it mean for our chairman whose catchword has been national independence but puts signature on such an anti national agreement?

Secondly, forget about raising the issue of scrapping 1950 treaty, the Prime Minister put a signature on an anti-national BIPPA (Bilateral Investment Promotion and Protection Agreement) with India when the Prime Minister Bhattarai had a first visit to Delhi. He openly violated the instruction of the Standing Committee meeting that had urged him not to sign in any controversial agreement with India in this transitional period. Chairman indirectly supported BIPPA by using ambiguous words. What is this, if not a betray to the nation, when a Prime Minister signs on an agreement with India in which Nepal agrees to provide facilities to Indian monopoly capitalist classes equal to the Nepalese investors and compensate the former when the projects undergo loss owing to internal causes like, Bandhs, strikes and rebellions? How does this accord stand in favour of Nepalese national bourgeoisie and Nepal herself? How does this deal agree with our party position in which it is said that the contradiction formed of mainly the Indian monopoly capitalist classes and their Nepalese agents, on the one hand, and Nepalese people and the nation, on the other, is the principal contradiction of the Nepalese society? Why our chairman uses ambiguous language in relation to this agreement which stands against party’s position on principal contradiction of Nepalese society. Does it mean anything other than national capitulationism?

Thirdly, Prime Minister Baburam Bhattarai declared to provide a relief package to the people after the government was formed under his leadership. But a strange, that did not show up as a relief package to the oppressed classes i.e. the landless and poor peasants. In fact, for the oppressed people, it was a ‘hurt’ package that made a commitment to returning the land back, with compensation, to those landlords from whom the landless and poor peasants had seized at the time of people’s war. Is not it a capitulation, before the landlord class, of the Maoist Prime Minister, who decided to return the land back to the landlords, and the Maoist party chairman, who forwarded to the entire party ranks a circular to implement that decision?

Fourthly, our party policy is to push both the processes of army integration and constitution writing side by side. But, well before the constitution was fixed, the PLA got disarmed by submitting container’s keys to the special committee no later than the government led by our party was formed. The seven point accord said to be related with peace process is such that has essentially surrendered PLA in the name of army integration. It goes against party’s central committee decision as regards army integration. Central Committee has categorically pointed out that firstly, national security policy should be framed, secondly, integration should be in an armed way and group-wise basis, thirdly, the new force should be formed comprising at least 50% from the PLA and rest from the security bodies, fourthly, this new force should be led by the PLA and finally it should be deployed as a border security force. Contrarily, the chairman signed a seven point deal which says to integrate PLA in an individual basis, disarm them and provide them the role of forest security guard and watchman. In this way, chairman Prachanda dissolved the PLA, which was said to have built up with an objective of preventing counter-revolution in the twenty-first century. Is not it a capitulation before the imperialists and their agents in Nepal? And which committee of our party authorised him to do this?

Fifthly, in order to bring to an end to the national, lingual and regional oppression imposed by the unitary state, the Nepalese people had achieved federalism, which is one of the main achievements of people’s war. The struggle our comrades waged in favour of establishing 14 federal states in Nepal has acquired majority in the state restructuring committee of the constituent assembly. Most of the parties, including Nepali Congress and UML, have opposed it. It is heard that our chairman has already agreed to the hidden proposal that the UML and Nepali Congress have put forward to organise Nepal in 7 federal states and form a parallel committee of the experts to help materialise it by reverting majority decision reached in the constitutional committee. Is not it a U-turn on the part of our chairman from his earlier position of federalism? Wherefrom did our chairman get this right to reach an agreement against party policy?

In total, after our party entered into peace process in general and formation of Baburam-led government in particular, our leadership has been taking wrong decisions against our party’s previous positions, commitments and concepts. They are manifested in the form of class and national treason. Now, the people have lost the entire achievements they had acquired during ten years of people’s war. There is no people’s power, the PLA that was formed under the Maoist concept of “People have nothing without people’s army” has been dissolved and also the federalism is being taken away by the so-called experts. Party’s policy of providing privileges for the oppressed people including Dalits, women, indigenous people, Muslims and Madhesis till they are competent in the society are being taken away from the impending constitution. Now what remains as the achievement of people’s war? How can one justify the validity of people’s war?

The aforesaid facts are not the expressions of mistakes and weaknesses on the part of our leadership. They are the outcome of his deviation from the ideological and political line and minimum strategy of our party. One can understand it from his long and recent interview which is published in a journal named Krambhanga, meaning rupture in English. He writes, “… Now it leads to a conclusion that the remaining task of New Democratic Revolution and the strategy of Socialist Revolution have converged at one point. Not that we should finish New Democratic Revolution first and then go for Socialist Revolution but the remaining task of New Democratic Revolution and the question of people’s insurrection, armed insurrection and socialist revolution have converged at one point.” In this way, the chairman has reached to a wrong conclusion that the establishment of bourgeois democratic revolution is the completion of New Democratic Revolution. This conclusion is against the decision of Chunwang CC meeting also. Now it is clear that our chairman had in fact adopted democratic republic as a strategy in Chunwang CC meeting though he said it was a tactic. All this clarifies that our chairman is in a swift process of rupturing from eclecticism to the vulgar evolutionism in ideology and centrist opportunism to the right revisionism in politics.

Why did our chairman put forward these ideas through Krambhanga, when the central committee meeting has just begun? It is very much meaningful. It clarifies that the chairman is in groundwork of putting forward a new revisionist line to liquidate the New Democratic Revolution into bourgeois democratic republic by dressing his right reformist programme with a gown of socialist revolution. In order to clear the way forward to New Democratic Revolution, it is urgently necessary to defeat his right revisionist line of socialist revolution from this meeting. And it is also an ideological footing to protect party unity. To make a jump into firm ideological struggle against chairman’s right revisionism is the need of the day for this CC meeting and the entire Central Committee members as well.