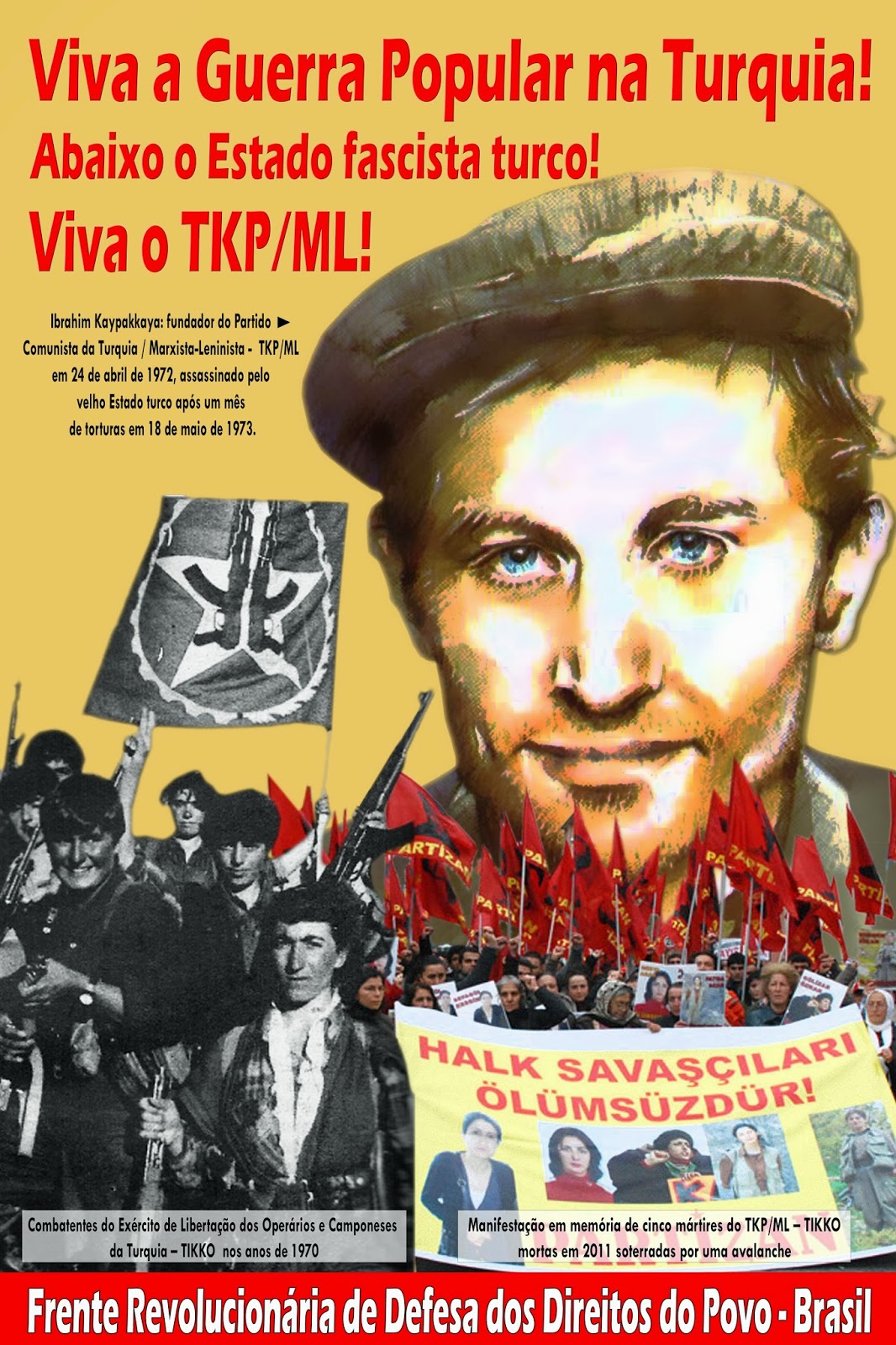 As TKP/ML we salute the 10th Anniversary of the Communist Party of India
(Maoist) with sincere revolutionary feelings.

The unification of the Indian communists under the umbrella of the
CPI(Maoist) has strengthened the revolution struggle in India. The
reactionary Indian bourgeois feared this unity of communists the most. The
unity of communists, has given the oppressed toilers and nations in the
country and increased their confidence in revolution. The regions under the
control of the CPI(Maoist) now having attained more stronger leadership
offer greater opportunities for the advancement of the revolution.

Although it may seem as if the crisis of the imperialist system of 2008
entered a statis, the crisis has not been overcome entirelly. The crisis has
been very costly to the system. The increasing unemployment and poverty in
the centre of the crisis, the US, has impacted a great portion of the
workers. The economic crisis emerging in the US has implacted the EU
severely, strongly impacting Greece, Portugal, Spain Italy and similar
countries, even leading some to bankruptcy.

The crisis that affected all the countries of the imperialist system also
continues to escalate the inter-imperialist contradictions. The rivalry
between the US-UK, Russia, Shangai Cooperation Organization and the EU and
Japan is continueing in the most hars way.

The geographies that the imperialists fight about the most are mainly the
Caucasus and the Middle-East.

In Ukraine the US and the EU are jointly fighting against Russia. Ukraine
has been on the menu with the US and EU for some time now. Besides the fact
that this is a large market, i the fact that it is on the route of energy
recourses increases the importance. The effort of the EU to overtake
Ukraine, supported by the US, seems to be evolving in Russia's favour wiht
the counter move Russia developed. The annexation of Crim, which was a part
of Ukraine, through the socalled referendum, has frustrated the plans of the
US and EU imperialists. While the fights between the pro-Russian separatists
and the Ukrainian goverment, the pro Russia troops, which hold many parts in
Donets and Lugansk in the eastern parts of Ukraine, during the last NATO
meeting, new implementation against Russia were discussed, Russia with its
peace agreement with Ukraine was able to frustrate this plan.

The Middle-East being a region with its rich oil recourses, gas and being a
large market has never dropped from the agenda of the imperialists. The
implementation of the Great Middle-Eastern Project of the US and the
occupation of Iraq in 2003 as a part of this plan the Middle-East has been
turned into a complete blood bath. The regime changes in Libia after Iraq,
then in Egypte and lastly with the addition of Syria the balance have
thorougly changed. With Russia and Iran backing up the Assad rejime and the
civil war being carried till now, is the continuation of the stage of the
failure by the US and western imperialists to overthrow the Assad rejime.

Following the withdrawel of the US military troops out of Iraq in 2011, and
the return to Iraq within three years, a new era began with the IS fed and
developed within the civil war in Syria and with the seizure of Mosul by the
IS.

During the NATO meeting on 4th September in England, the agenda points that
were discussed Ukraine and Iraq, were based on the plans on how Russia was
on how to lower the influence of Russia in Ukraine and how to regain
controle over Iraq again.

The process that started with the seisure of Mosul by IS, with socalled
humanitarian grounds being put forward, regaining the controle over Iraq,
are nothign more than the plan of the imperialists to re-design the
Middle-East. The imperialist care not about any human drama or massacre. The
imperialist who remained silent in the face of the massacres committed by
the IS on behalf of the imperialists, the inhumane attacks on the Kurds of
Rojava, the attacks on the Ezidi's in Shengal and the displacement of
hundreds of thousands op people, have decided to intervene against the IS
when their own interest were at jeaopardy in Iraq.

The US and Western European imperialists are now searching for armies that
will wage war against the IS in Iraq on their behalf. The decision to supply
weapons to the Peshmerga in Iraqi Kurdistan is exactly a part of this game.
The imperialist being the cause for the problem cannot be the mediator for
the solution. The peoples of the Middle-East should disrupt this imperialist
game together. All progressive and revolutionary forces should join forces
against the IS monster and should fight against this reactionary
organization and against imperialism.

In this process of the redesigning of the world by the imperialists, those
most impacted by this are the oppressed nations and toilers. Every day
thousands of migrants dy on the open seas or are struggling on roads for
life and death. The hundreds of thousands migrants who survive and come to
European countries are forced to live under the worst conditions. Racist
attack, humiliate and kill migrants where ever they can.

Semi-colonial countries continue to be plundered by imperialist countries.
Cheap labour, subcontracting, poverty, work-related accidents are presented
as if they are the faith of these countries.

Africa is fighting poverty and hunger. The gradual spread of the Ebola
outbreak faces mass deaths in many African countries. Imperialist monopolies
refuse to produce and give medicine to these countries as they do not have
the funds to by these and it does not produce any profit.

The ecological balance of the world that is deteriorating due to the greed
for profit bears the risk of the world becoming uninhabitable in the next
few decades. All these are the results of the endless thirst for profit by
the imperialists. As long as there is an imperialist system, exploitation,
war and the slaughter of people will continue.

Revolution is the only way for the oppressed nations and toilers to rid
themselves from the imperialist exploitation and repression. The working
class in semi-colonial, dependent, imperialis and capitalist countries have
no liberation but socialism.

What freigthens the imperialists most are the countries where People's Wars
are waged. Genuine anti-imperialist struggle today is those struggles waged
with People's Wars. The importance of the People's War in India is that it
aims for true liberation. The People's War in India lead by the CPI(Maoist)
is the reason for the fear of the Indian reactionary bourgeoisie and their
masters imperialists. The attack on communists under the name of Operation
Green Hunt, the killing of cadres of the CPI(Maoist), the brutal treatment
of hundreds of thousands of politial prisoners and the abdcutions of
intellectuals such as Sai Baba are expressions of this fear.

DOWN WITH IMPERIALISM, FACISM AND ALL SORTS OF REACTION