DU Prof G .N .Saibaba – We must support thousands of adivasis being displaced and arrested 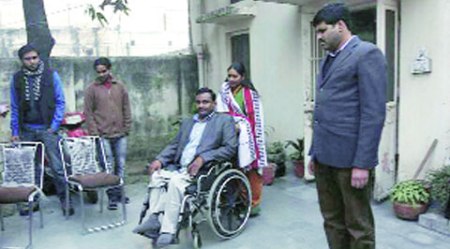 On the 4th of April, the Hon’ble Supreme Court of India granted me bail, and I have finally returned home, after spending more than three and a half months in prison, pursuant to the cancellation of the interim bail granted to me by the Bombay High Court.This last stint in Jail has adversely affected my health and I have to resume medical treatment immediately, to try and restore basic mobility of some of my limbs and muscles.
At the outset, I wish to  thank  all my lawyers in Delhi, Bombay, Nagpur, and Gadchiroli, who appeared for me, and  defended me  in the strongest manner in Court, both to secure my bail and while conducting the trial of my case in Gadchiroli. Without them, I would still be languishing in jail. My fight for justice, is far from over and I forsee many more legal challenges in the case but I am confident that my lawyers will deal with those challenges with professional skill and dedication.
I would specially like to thank the teachers, students and activists who formed a Defense Committee and conducted several programmes in the last two years demanding that I be released forthwith. I thank Professor Haragopal, Dr. Nandita Narain, Dr. Karen Gabriel, Dr. Hany Babu and all other members of the Defense Committee who relentlessly fought for my release. I thank the Delhi University Teachers Association (DUTA) and various teachers’ unions of different universities that stood up for my rights and release.
I would also like to thank all those intellectuals, teachers, students, political organizations, writers, democratic rights activists, disability rights activitists, cultural activists, media persons and many others who fought for my release. In prison, I got news about various programmes that were being held across the world demanding that I be released from prison.  This gave me the mental strength and will power to combat and endure the hostile and inhuman conditions that I was exposed to in prison.  I do not personally know many of the people who stood in my support and who came out to protest against the violation of my democratic rights.  I feel humbled and I am truly grateful that I received such widespread support.
We now, more than ever before in our history, face an unprecedented assault on all forms of democratic rights and freedoms.
Our campaigns, therefore, must not end with the release of a few individuals but must oppose all forms of  injustice, oppression and exploitation. Hundreds of thousands of Adivasis are being displaced from their homes and forests as they face brutal repression at the hands of the State and so many of them remain in jail, without proper legal representation and on very flimsy charges.
We must come out in support of these poorest and most vulnerable sections of our population. We must also, aim to break free from the larger prison that forces us to live under the shackles of Brahmanical feudalism and fascism.
We must remain vigilant, so that the rights of minorities, both ethnic and religious, are not violated by the State. As someone who has been a democratic rights activist throughout my life, I can say with confidence, that in the days to come, these struggles will continue, with renewed passion and vigour.
G N SAIBABA
University of  Delhi
DELHI
Publicado por dazibao rojo en 10:43 a. m.