INDIA: APDR PRESS RELEASE 29 October 2016 On killing of about thirty persons including several Women in Malkangiri 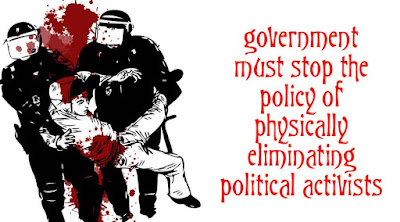 APDR strongly condemns the killing of about thirty persons including several women  described as members of the CPI (Maoist) and some villagers in a dense forest area of Malkangiri in the Andhra-Orisa border region on 23 October as reported in the press and as per information received from Human Rights Organisations. The incident of killing was described as an ‘encounter’. The number and nature of casualties as reported in the media quoting police sources clearly indicate that there was no ‘encounter’ and people were killed in captivity. According to a report they were poisoned and sedated by agents beforehand and were targeted while asleep, some of them after brutal torture. According to reports some people including CPI (Maoist) leader had been taken into custody, but they were not produced in any court or there is no news about their whereabouts.
It has become amply clear that the state and the security forces  are pursuing a policy of physically eliminating political activists and dissenting voices who are opposing various  state policies including dispossessing the indigenous people of their livelihood and clear the ground for corporate loot. To keep such illegal and anti  human rights crimes outside the purview of the citizen of the country and outside world,, persecution and hounding out journalists, rights activists and lawyers from such areas have become part of state policy in these areas for the last couple of years. .Only on 21 October, report of a CBI investigation in a 2011 incident of burning down of 160 houses in an Orissa village Tadmatela was made public. The CBI found that the carnage for which the Maoists were blamed, was actually the handiwork of security forces. The response to these findings was the ridiculous programme of burning of effigies of journalists and rights activists who dared to bring out the truth on 24 October by by the uniformed security personnel.
APDR  strongly opposes the state policy of physically eliminating political activists and dissenting voices and persecution of journalists, lawyers  and rights activists.
A Co-ordination of Democratic Rights Organisation (CDRO ) team will be visiting the place of  carnage in the first week  of November to bring out the facts
Meanwhile APDR demands:
1.The government must stop the policy of physically eliminating political activists and dissenting voices, which tantamount to genocide of people believing in a particular ideology.
(Amitadyuti Kumar)
Working President, Association for Protection of Democratic Rights (APDR)
(M) 9433346109
18 Madan Boral Lane,
Kolkata  West Bengal  700 012
033 26801439
Publicado por dazibao rojo en 5:29 p. m.