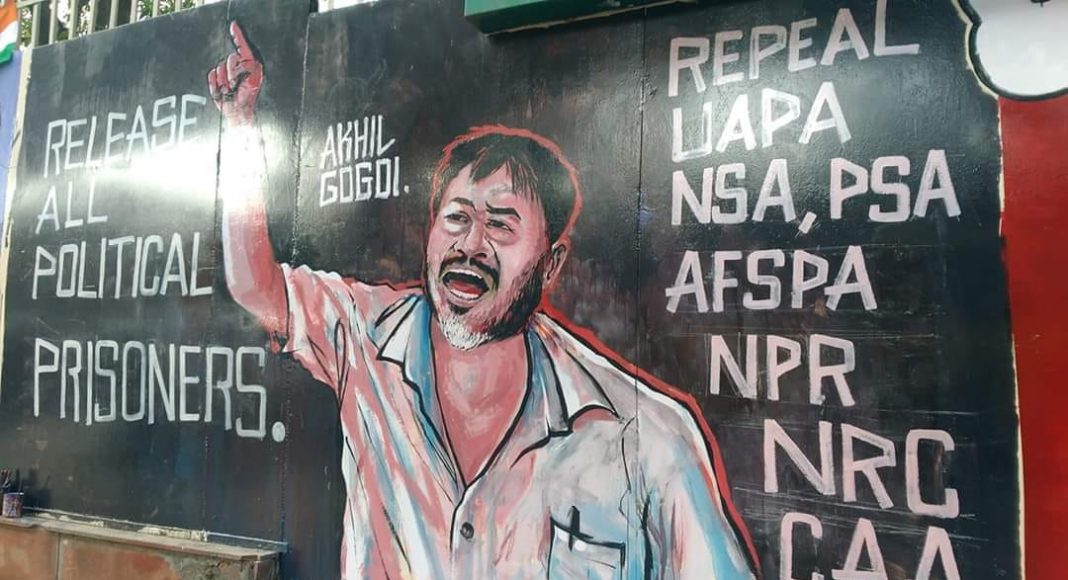 Thousands of people in Jorhat came forward to form a human chain in the shape of the map of Assam, demanding the immediate release of Krishak Mukti Sangram Samiti (KMSS) leader Akhil Gogoi who had been arrested on December 12, 2019 amid anti Citizenship Amendment Act protests and booked under the Unlawful Activities Prevention Act (UAPA).
He is currently being investigated by the National Investigation Agency (NIA) for being in an alleged nexus with Maoist rebels, reported The Telegraph. The teams of the NIA also reportedly reached Gogoi’s residence at Nizarapur and the Gandhi Basti office of the KMSS and took away several files, an old laptop, his hand-written diary containing accounts of his time spent in jail earlier and other important documents.
The protest held on Monday at the Baisahabi playground in Selenghat against the CAA and in demand of Gogoi’s release was led by the All Assam Students’ Union (AASU) and supported by the Asom Jatiyabadi Yuba Chhatra Parishad, All Moran Students’ Union and other organizations.
Gogoi’s mother Priyada Gogoi who had gone on a hunger strike last month demanding her son’s release, also attended the protest and said she believed her son had been ‘framed’.
Popular singer Manas Robin who also took part in the protest asked the people to remain patient and said that the agitation against the CAA would go on till it would be repealed. “Today, Akhil Gogoi may be behind bars but he wants every Assamese to fight for the rights of the people of the state. So we have to continue this fight on his behalf,” he said.
Sagar Sonowal and Puheshwar Sonowal from the AASU were detained along with 13 others on the morning of the protests and released the same evening. Sagar Sonowal said, “Instead of opposing CAA, BJP legislators and parliamentarians are supporting the Act which is anti-Assam and unconstitutional.”
Meanwhile, the AASU is continuing with its ‘black flag’ protest all throughout Assam.
Even the students of Jamia Millia Islamia University have joined the chorus for the release of Gogoi who is being termed as a ‘political prisoner’. The students of Jamia are expressing their displeasure over his arrest by painting graffiti on the walls of the University, turning them into ‘walls of discontent’, reported Time8.
Publicado por dazibao rojo en 1:26 p. m.