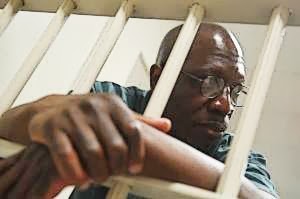 Monday, February 3rd until Friday, February 7th we are asking people to make at least one call to demand that Clarence Moses-El be released from prison, where he is in the 27th year of a 48 sentence for a crime he did not commit.  Your calls are important and will have an impact.
Add your voice to those urging release of Clarence Moses-El.  Clarence Moses-El has been in prison for 27 years, convicted  because of a dream and has always maintained his innocence.  The Denver Police Department destroyed DNA evidence that would have exonerated him after Moses-El won a court order to have it tested.  Recently, the person originally identified as having committed the crime confessed, writing a letter asking for Moses-El attorney to visit him, beginning the letter with, “I really don’t know what to say to you.  But let’s start by bringing what was done in the dark into the light. I have a lot on my heart.”
It’s time for District Attorney Mitch Morrissey to do the right thing and set Clarence Moses-El free.
Monday February 3rd – Friday February 7th Week long National Call-in Campaign for Clarence Moses-El
CALL: District Attorney Mitch Morrissey - 720-913-9000
In Denver, Join us for a press conference/rally to announce the week long national call-in and campaign to free Clarence Moses-El.
Monday, February 3rd
12noon
Front Entrance of Wellington Webb Building
201 W. Colfax Avenue
https://www.facebook.com/freeclarencemoses?ref=hl

Add us to your address book @solidarityweb.com