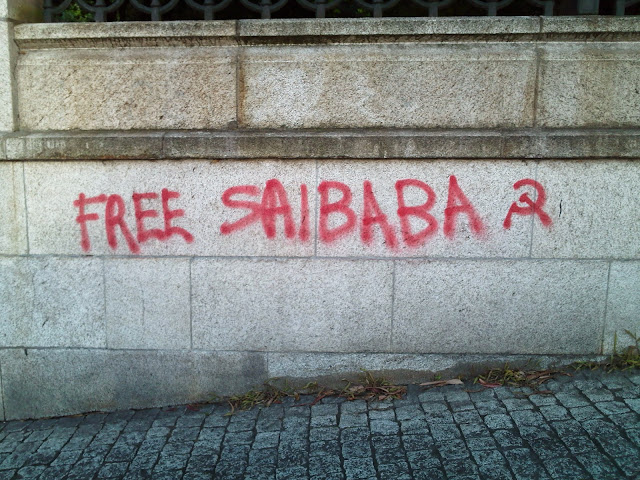 Delhi University professor G N Saibaba, jailed for alleged Maoist links, was on Tuesday granted bail for three months by the Bombay High Court on health ground. Saibaba has been in jail since his arrest in May 2014 by the Maharashtra Police from the Delhi University campus.
Saying that it will be failing in its duty in protecting the fundamental rights of Saibaba, the Bombay High Court granted him bail to undergo medical treatment for his failing health condition.
The English professor will walk out of Nagpur Central Prison as the HC felt he needed his family’s round-the clock assistance. He has been asked to furnish a personal bond of Rs 50,000.
“If extra ordinary powers enshrined under Article 226 is not exercised, this court will be failing in its duty to protect the fundamental rights of professor G N Saibaba, professor of English at Delhi University. Therefore, this court is inclined to direct respondents (jail authorises) to release him for three months for medical treatment and support of his family,” Chief Justice Mohit Shah and Justice S B Shukre observed.
Public Prosecutor Sandeep Shinde, however, opposed the reprieve saying Saibaba is associated with the banned CPI (Maoist) and there was a possibility of him tampering with evidence.
He argued that the hard disk retrieved from Saibaba’s house corroborated with the evidence in memory cards gathered from a couple of accused who had claimed of getting it from Saibaba.
Activist Purnima Upadhyay, whose letter to the court highlighted Saibaba’s failing health, had pointed out the difficulties faced by his family in getting him treated. His family stays in Delhi and his wife and brother have to travel frequently to meet him.
The HC took note of the affidavit which says that Saibaba had to be wheeled with assistance. He had also dislocated his shoulder, besides having a crippled right hand due to spinal problems.
“He often gets muscle cramps. He has also been fainting. He said that complications in his kidney and gall bladder have led to urinal problems as he was on strong medication,” the petitioner had said. Keeping his deteriorating condition in mind, the court noted that there was a need to re-examine his bail plea.
Allowing Saibaba’s brother and wife to meet him, Chief Justice Mohit Shah and Justice A K Menon had earlier directed prison authorities to shift the professor to a hospital of his choice. The HC had also rapped the police for ‘working blindly’ and treating the ailing professor ‘like an animal’.
Senior counsel Gayatri Singh, appearing for the petitioner, had said that government facilities in Nagpur were incapable of handling Saibaba’s case. Escalating medical cost, up to Rs 1 lakh, which the family had incurred was worrisome, she had said.