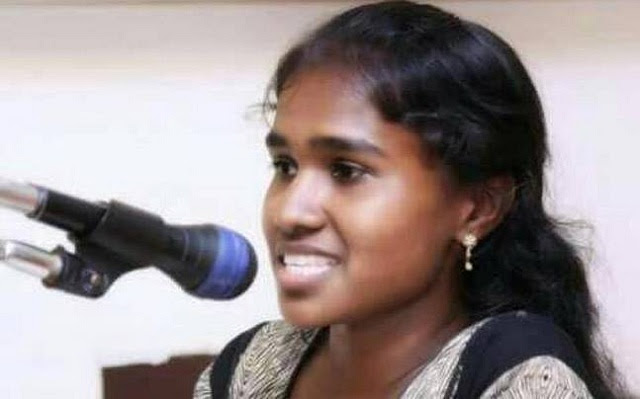 Tamil Nadu police in Kathiramangalam this week arrested a second-year journalism student under the Goondas Act for taking part in the regionʹs oil pipeline protests. Valarmathi, the student, has also been labelled a Naxal sympathiser by the police.
Valarmathiʹs arrest has made the situation in Kathiramangalam more volatile. The village has been rocked by continuing protests over an ONGC oil pipeline. Protests first broke out on June 30 after villagers noticed viscous substance leaking out from an ONGC pipeline in the area.
Villagers, worried that the leak would damage cultivable land, clashed with ONGC officials, causing Tamil Nadu police to resort to lathicharge, injuring many.
Valarmathi, a second year journalism student, was among the hundreds who joined in the protests in Kathiramangalam. She is said to have issued pamphlets carrying data on how oil pipelines could damage culitavational lands irreparably.
On July 14, she was detained. Police first labelled her a Maoist but then changed their stance, saying she was a ʹMaoist sympathiserʹ.
On July 16, Valarmathi was charged under the Goondas Act, which deals with bootleggers, drug offenders, goondas, immoral traffic offenders, forest offenders, sand offenders, slum-grabbers and video pirates. She has been locked up in the Coimbatore prison.
ARREST CONDEMNED
Valarmathiʹs arrest has been condemned by various political parties. DMK leader MK Stalin criticsed the arrest, saying it was against the Constitution. "How can a student who was protesting to save nature be booked under Goondas Act?", Stalin questioned.
"Valarmathiʹs arrest only means that AIADMK government doesnʹt want to show any leniency towards anyone protesting against the Center. EPS is doing Modiʹs job", J Anbazagan, a DMK MLA, said.
Apart from the BJP and AIADMK, every party in Tamil Nadu has come out in support of Valarmathi.
Chief Minister Edappadi K. Palaniswami, today attempted to block MK Stalinʹs questions on Valarmathiʹs arrest, by invoking the ʹSection 110ʹ clause, under which nobody in the Assembly can counter argue on the matter.
"Anyone found to instigate people to protest will be charged under Goondas Act", Palaniswami said, going to say that Valarmathi has a history of being arrested more than 6 times, which is why she was booked under the Goondas Act.
The Goondas Act was created to target repeated rapists, murders, illicit alcohol manufactuerers and video pirates.
Notably, a pro-Tamil activist Thirumurugan Gandhi too was once booked under Goondas Act after his continuous criticism of the Center on the Sri Lankan Tamils issue.
Valarmathi was previously arrested in April when she was on her way to Neduvasal to protest against the Tamil Nadu governmentʹs decision to allow shale gas extraction. Valarmathi had then allleged ill treatment at the hands of police, claiming she was made was nude searched six times.
Publicado por dazibao rojo en 12:26 p. m.