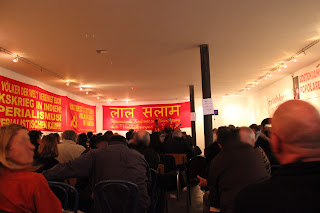 Hamburg conference in support of People's War in India has been concluded. It is a matter of pleasure that it has concluded with a grand success. It was a great ceremony, a extraordinary conference. Three hundred delegates attended the event and several Maoist Parties and many anti-imperialist, organizations and working groups had sent their messages in support of Peoples War in India. As the International Committee to Support the People's War in India : League against Imperialist Aggression (Hamburg, Germany) has mentioned in its press release :

Yes, we are in our best effort. Now there is 30 days to the 7th National Congress of our Party. After 22 years we are going to meet the National Congress. We have no any confusion in our destination. We are firm in our goal. And we know there is one and only way to move forward - the Maoist Road, which leads to the New Democratic Revolution. The Great People's War is only the way to achieve the goal.
Publicado por dazibao rojo en 12:00 p. m.