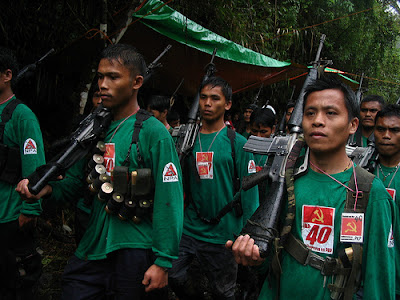 
Upon the recommendation of the Negotiating Panel of the National Democratic Front of the Philippines (NDFP), the Central Committee of the Communist Party of the Philippines hereby declares to all commands and units of the New People’s Army (NPA) and the people’s militias a ceasefire order that will take effect from 00:00H of 20 December 2012 to 23:59 of 15 January 2013.

This ceasefire order is being issued in sync with a similar ceasefire order to be issued by the officials of the Government of the Republic of the Philippines (GPH) as agreed upon in a special meeting between the NDFP’s special representatives and their counterparts in the GPH last 17-18 December in The Hague, Netherlands, hosted and facilitated by the Royal Norweigian Government.

This ceasefire order is being issued in solidarity with the Filipino people’s traditional celebrations of Christmas and New Year holidays. This will also enable the revolutionary forces to carry out mass assemblies and public demonstrations to mark the 44th anniversary of the CPP and celebrate revolutionary victories of the past year. This ceasefire order extends the earlier ceasefire declaration issued by the National Democratic Front-Mindanao for NPA units operating in areas devastated by typhoon Pablo covering the period December 5, 2012 to January 3, 2013. By extending the ceasefire, NPA units in the devastated areas can continue with rehabilitation work and assist the disaster victims in resuming their livelihood. This ceasefire order is also being issued in support of efforts to jumpstart the NDFP-GPH peace negotiations.

The NDFP-GPH talks have been stalled over the past two years as a result of the adamant refusal of the GPH to comply with previous agreements. The revolutionary forces anticipate that the synchronized issuance of a ceasefire order by the NDFP and GPH forces will propel the GPH to release consultants of the NDFP as well as political prisoners who were arrested and continue to be detained in violation of the Joint Agreement on Safety and Immunity Guarantees (JASIG) and the Comprehensive Agreement on Respect for Human Rights and International Humanitarian Law (CAHRIHL).
During the ceasefire period, all NPA units and people’s militias shall cease and desist from carrying out offensive military operations against the armed units and personnel of the Armed Forces of the Philippines (AFP), the Philippine National Police (PNP) and other paramilitary and armed groups attached to the Government of the Republic of the Philippines. Personnel of the AFP and PNP who have no serious liabilities other than their membership in their armed units shall not be subjected to arrest or punitive actions.
They may be allowed individually to enter the territory of the people’s democratic government to make personal visits to relatives and friends. While all units of the NPA and the people’s militias shall be on defensive mode at both the strategic and tactical levels, they shall nonetheless maintain a high degree of militancy and vigilance against any hostile actions or movements of the enemy armed forces including encroachment on the territory of the people’s democratic government, surveillance and other offensive operations including so-called “peace and development”, “civil-military” or “peace and order” operations.
Active-defense operations shall be undertaken only in the face of clear and imminent danger and actual armed attack by the enemy forces. All branches and committees of the CPP, units of the NPA and people’s militias and revolutionary mass organizations should closely monitor any hostile actions being carried out by the enemy armed forces. Such information should be reported to the concerned commands of the New People’s Army and leadership of the Communist Party of the Philippines.