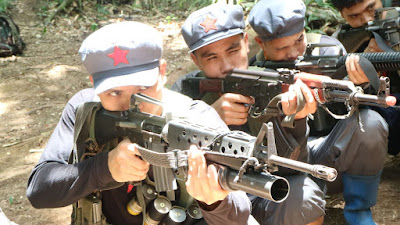 Information Bureau
Communist Party of the Philippines
9 September 2017
1. Duterte’s demand for an NPA ceasefire while the AFP conducts all-out war as precondition for peace talks is a demand to surrender. This is an unacceptable. Does Duterte really take the revolutionary forces for fools?
2. Duterte has lost all moral ground to make such a demand. Recall that the NPA declared a ceasefire on August 19, 2016 which lasted for close to 160 days as a response to Duterte’s signed commitment to release around 500 political prisoners through an amnesty proclamation. Duterte, however, wasted the goodwill of the NDFP when it failed to fulfill its commitment and took advantage of the NPA ceasefire to deploy his soldiers and conduct military offensives.
3. In the face of Duterte’s tyrannical rule and triple war, the people clamor for the NPA to mount more and more tactical offensives. Victories of the people’s army inspire resistance amid widespread killings and the climate of fear imposed by the Duterte regime.
4. The NPA launches tactical offensives to bring to account the Duterte regime and its soldiers and police for thousands upon thousands of Oplan Tokhang killings, the successive killing of peasants, national minorities and youths, military occupation of civilian communities, aerial bombings and shelling, the near-genocidal war against the Maranaos of Marawi, arbitrary arrests and detention and so on.
5. As proven in the past, NDFP-GRP negotiations can proceed and make progress even while the civil war rages. As a matter of principle, the revolutionary forces remain open to negotiations as a means to attain a just and lasting peace even as it wages people’s war, conduct tactical offensives and confront the US-Duterte regime’s Oplan Kapayapaan all-out war. The NDFP-GRP negotiations, however, cannot be fruitful while Duterte remains obsessed with Oplan Kapayapaan and demanding NPA capitulation.
6. The Filipino people and their revolutionary forces have waged close to fifty years of people’s war. They do not tire. They are determined as ever to wage revolution because they seek to end the unbearable sufferings of workers and peasants under the oppressive and exploitative system.
7. Duterte threatens to wage fifty more years of counterrevolutionary war. By the looks of it, Duterte may not even last his term. He has roused the anger of the Filipino people and caused his increasing isolation. The revolutionary movement will surely outlast the US-Duterte regime.
Publicado por dazibao rojo en 1:05 p. m.