TURQUIA: TKP/ML Central Committee – Politburo: “Those who become the sun to the mornings so that no one woke up to the darkness!”…TİKKO Dersim Regional Commander Özgür and the Fighter Asmin are Immortal! 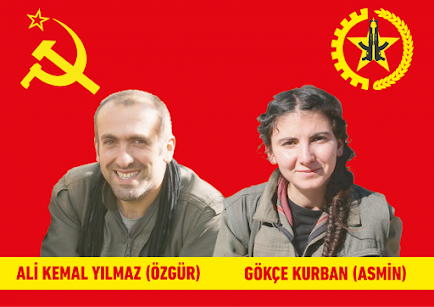 Our Working People of Turkish, Kurdish and Various Nationalities and the Guarantee of Our Fight the International Proletariat;

In these days when the fascist dictatorship thinks it is invincible; In these years when the all-out attacks against all masses of people, especially the guerrilla forces, continued uninterruptedly; In this period of military occupation and aggression from Rojava to North Africa, from the Caucasus to the Eastern Mediterranean; in these times when chauvinism seizes minds with a heinous siege; In these conditions where liquidationism is substituted for the power perspective politics with the by turning the decline in the class struggle into a politics of “preserving power”, “reconciliation”, “pacification”, “reformism”; In this process, where the technological power of the fascist dictatorship was exaggerated and the battlefields were abandoned; In this situation, where the darkest state of darkness collapses like a nightmare, where despair stalks, unbelief swarms, the most reckless and worst forms of the counter-revolution are experienced and which surrounds the spirit of the time, our Party continues to challenge this whole process by shouting the slogan “Long Live the Victory of the People’s War” in Dersim.

First, in the midst of the war, the elite staff of our Party and Central Comittee member Nubar (Erol Volkan Ildem) shouted the loud voice of “insisting on guerrilla warfare to win political power” together with Rosa, the staff of our future. Then the Commander of Dersim District Özgür (Ali Kemal Yılmaz)’s instruction came saying, “We will succeed in the war of survival, even with heavy costs and the highest level of losses” with Asmin (Gökçe Kurban). In the guerrilla area, which is the jugular vein of our party’s general political line, loud voices broke out first from the political leader of the field and then from its commander.

From October 1 to October 4, the fascist dictatorship carried out a heavy bombardment with armed drones, F-16s and helicopters that would shake the windows of houses even in the city center, in Dersim-Ovacık Büyükköy. In this operation carried out by fascism with all military ways and means, comrades of our Party, Dersim Regional Commander Özgür (Ali Kemal Yılmaz) and the Advanced Militant of TİKKO, Asmin (Gökçe Kurban) were immortalized.

The fascist dictatorship announced its cries of joy again with Süleyman Soylu (minister of the interior). However, the enemy was not content with these cries. By beheading our comrades, he showed what level of anger and fear he was in. The “law of brotherhood” in the Middle East gives us a message with the fear and terrifying method of the Jihadist organizations. But these methods and barbarism against the guerrilla are not new. At the point where he became desperate against the guerrilla struggle carried out by the PKK, he escalated the psychological war with these methods. Süleyman Soylu and fascist executioners should know that none of your attacks and methods would intimidate us. We have received the message of the fascist dictatorship clearly and precisely. Here is our message to you: To take your soul, to call to account with the red bullets of the TKP / ML, to be more decided and determined for the victory of the People’s War, to transform the severed heads of our comrades into the consciousness of making them paying a heavy price. You should know that the cut heads will appear before you as more believers in the cause, focused on the war, locked in asking for an account.

Comrade Özgür was born in 1985 as a child of a working family from Sivas. At the age of 16, he entered the class struggle with TMLGB (Marxist-Leninist Youth Union of Turkey) in high school activity. Within TMLGB, he managed to stand out its activities in a short time. He was one of the first militants of the process in which TMLGB took a new direction from the “left” line condemned. He won the Diyarbakır Dicle University with the orientation to organize in the Tukish Kurdistan. He became a member of TMLGB in 2003. He was organized in the Turkish Kurdistan Regional Committee and, until he joined the guerrilla in 2007, he took part in the class struggle as an active staff of Komsomol. All his features that appear in Komsomol also show itself in the guerrilla field. In a short time, he quickly climbs the command steps with his skills, daring and agility in mass work. He is organized in Dersim Regional Command in 2011 and becomes Deputy Regional Commander. He is the Regional Commander from 2017 until he becomes immortalized. In 2015, Comrade Özgür becomes Party Candidate Member. Although the Candidate Membership process is over due to intra-party discussion and splittist process, and in order to prevent the splittist understanding from discussing “nylon membership” with manipulations, the approval of its membership by Dersim Party Comittee is suspended. Later, after the separation of the Right Liquidator Party and the War Fugitive Band, his Party membership is approved. He takes an active stance against the splittism that appeared in the party in 2015. He positions itself as an active party member against the splittist work that the Right Liquidator Party and the War Fugitive Band are trying to carry out in the field of guerrilla. He does not give credit to the corruption in the guerrilla. He criticizes the Party for not developing more active and harsh measures against the rotten and corrupt nature of this band. Comrade Özgür is determined to fight as well as willing to solve problems. He never refrains from taking responsibility in the Guerrilla War. However, his most prominent side in the guerrilla field is, raising the guerrilla’s morale and making them more closely tied to the fight and the party in the worst conditions. Where he is, there is no despair. Where he is, there is a solid and close relationship with the masses. Where he is, there is the unwaveringness of his comrades and an endless trust.

Asmin, the pupil and the hope of future of her commander Özgür, was born in 1997 in Dersim Pertek. Comrade Asmin was introduced to revolutionary ideas at a young age. While studying at Dersim Atatürk Anatolian High School, she was organized in Komsomol’s High School activity. She soon became an active militant of the actions. She deeply felt the pain and contradictions of the people, especially women and children. A group of high school teenagers, together with her classmate and soulmate, Rosa (Fadime Çakıl), decided to “be the sun to the mornings so that no one woke up to the darkness. After Comrade Rosa took the first step, in October 2014, she embraced her courage and faith and joined the guerrilla. In a short time, she took a great place in the guerrilla with her vitality and enthusiasm. Each of her comrades who became immortalized next to her, increased her hatred of the enemy and her consciousness to call to account. Comrade Asmin welcomed a difficult process for our party at a young age  without hesitation. Neither the despair that the right-wing liquidator escapism tried to create, nor the intense operations of the enemy, nor the losses experienced could not bring her back. She became a young, dynamic fighter of our survival war and a militant who protected her party like a pupil.

It is time to accomplish the difficult, to give time to the apparent impossible.

We suffer heavy losses. We strive to bear these losses, to heal our suffering and to sharpen our anger by grasping the law of war and class struggle. With class hatred, party consciousness, belief in communism, we stand against the fascist dictatorship in the war ranks. We lost our CC Member and Regional Commander the weapons in the hands. We have no intention to sanctify them, to make them legends. Because, under the circumstances we are in and the conditions we are going through, taking this positioning and its maintenance is already epic . There is a heroism and attitude that is shaped by the contradictions and political needs of the masses and becomes a leader and militant, armed with the claim of political power and changing the world they comprehend. This is an obvious fact. In this line, we will proceed steadfastly, persistently and resolutely with faith in the victory of the People’s War.

Our Working People of Turkish, Kurdish and Various Nationalities,

The losses that we have are enormous in this section of history. Our pain sharpens our anger. Our anger causes a clearer and determined understanding of the antagonism in the revolution struggle. This understanding causes us to be clearer in the struggle for power, more meticulous in grasping the problems of the war, more daring in filling the positions, and more determined in raising the People’s War. Every comrade who falls in the fight makes us re-grasping the proletariat’s antagonism, destined to win everything and destroy itself. This winning claim turns into a better equipped, further instruction to comprehend, every drop of blood flowing, every soul that falls.

Nubar’s instruction to become a Party, Özgür’s insistence on army formation, Rosa and Asmin’s determination to hold on to the war now impose on our party the obligation to act with a new spirit, a new equipment, a new move and a new hope.

Comrades, we accept this imperative. Like Nubar, “we will develop proletarian revolutionism by becoming a Party.” We will Nubarize this instruction of our 1st Party Congress.

We will become an army like Özgür, to raise the People’s War and make it victorious. Yes, we will do the “Raising the People’s War” instruction of our Congress by becoming Özgür.

Like Rosa and Asmin, We Will Keep at War, we will meet the war by improving our level of organization. We will fulfill the instruction of our congress on “more robust, militant and disciplined party organizations” by becoming Rosa and Asmin.

Our comrades called for these instructions to be better equipped in carrying out the instructions of the Party line. Now we will claim this call with all our soul, ourselves, and of course we will give it its due. We are in this claim and determination. The daughters and sons of our people will hear your call, and the cadres, members and militants of our Party will fill your positions with determination and without hesitation. We will insist on the line of People’s War stronger and more determined, better equipped and more persistent.

Be Nubar in Party, Özgür in Army, Rosa and Asmin in Militanization!

We Will Drown Fascism In The Blood It Shed!

Long Live the Victory of the People’s War!

We Will Destroy the Bourgeois-Landlord State, We Will Found People’s Power!