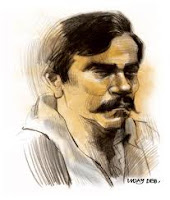 in mourning we received the message, that Comrade Kishanji, member of the polit bureau of the Communist Party of India (Maoist), was murdered by bandogs of the Indian state on 24.11. Kishanji had a moving life as an activist of the communist movement in India by decades, which he completely devoted to the matter of revolution - the axiom "to serve the people!" in fact filled his life! His death is not only a heavy loss for the revolutionary and communist movement in India, especially for the Communist Party of India (Maoist), but actually an impact for the communist world-movement. But the imperialists and all other reactionaries are wrong if they imagine that they can strike back and break down the movement of millions of suppressed people by murdering some of their leaders. Far from it! The masses of people will transform the mourning in power and further resistance and they will emerge new cadres of their great movement again and again.

As marxist-leninist-maoist communists in Austria, we want to express our unbowed and active solidarity with your struggle, with the revolutionary process in India. We think, that we express this solidarity best by tackling the most important next duties in Austria - the establishment of a real communist party - even more strong-willed and straight!