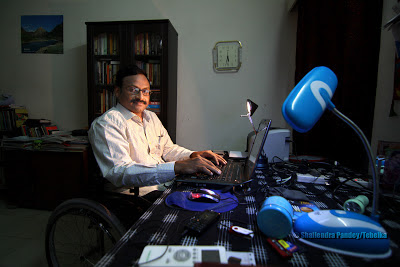 INDIA: CONDEMN THE ARBITRARY RAID OF THE HOUSE OF PROF. GN SAIBABA, A PUBLIC INTELLECTUAL AND JOINT SECRETARY OF RDF!

COMMITTEE FOR THE RELEASE OF POLITICAL PRISONERS


CONDEMN THE ARBITRARY RAID OF THE HOUSE OF PROF. GN SAIBABA, A PUBLIC INTELLECTUAL AND JOINT SECRETARY OF RDF!


A JNU STUDENT!
In an unprecedented act of terror to terrorise, on the 12 September 2013, around 3 pm, a joint operation of a team from the National Investigation Agency (NIA), 7 members from the Special Cell of the Delhi Police, 15 member police team from the Aheri police station, Gadchiroli, Maharashtra, 7 member police team from the Maurice Nagar Police Station, Delhi University—all put together 50 member squad—barged into the premises of the quarter in which Prof. GN Saibaba was staying with the family.

The Aheri police team comprised of Mr. Suhas P Bawache who happens to be the Investigating officer of the case in which Hem Mishra, a JNU student has recently been shown as arrested in Aheri police station limits. Additional SP Shashi Kumar was also part of the team. The NIA team refused to reveal their identity. Sub Inspector Sanjeev Kumar identified himself as part of the Maurice Nagar Station while his colleague Narendra Dubey from the same station refused to reveal his rank. As mentioned before the team comprised of 50 members just to raid the premises of a family comprising of three—Prof. GN Saibaba who moves in a wheel chair with serious disability, his life partner AS Vasantha and their daughter Manjeera in her teens. Undoubtedly it was an act of intimidation, cold and calculative.

Prof. GN Saibaba had just returned from Ramlal Anand College where he teaches in the English department. Sooner than later the marauding team of police/intelligence had seized all the mobiles—Saibaba, his partner AS Vasantha and daughter Manjeera—and confined them to a room. Even his driver was not spared as he was not allowed to leave. The main gate of the premises was locked from inside. The doors of the quarter were locked or manned by the team. No one was allowed to go inside. Whosoever tried was threatened with dire consequences in the form of cases.  Prof. GN Saibaba insisted that the warrant for search be shown. The response was outright shouting and blatant threats from the police/intelligence/special cell. After doggedly persisting they finally showed him the warrant which was issued by the First Class Judicial Magistrate from Aheri, NG Vyas, to purportedly recover “stolen property” from the premises of Prof. GN Saibaba under Section 93, 94 of the Cr PC!

Prof. GN Saibaba insisted that he be allowed to talk to his lawyer so that the search can happen in his presence. This was ridiculed and ignored as the police insisted they can do anything. Prof. GN Saibaba further added that he wanted to talk to the president of the Delhi University Teacher’s Association as it was a blatant violation of the rights of the faculty as such raids cannot be conducted in the university premises. This was further ridiculed by the Maurice Nagar police as they maintained there is no need for any such permission as they can go anywhere with such a warrant. For three and half hours Prof. GN Saibaba and his family had to undergo the humiliation and intimidation resorted to by the raiding team. They went on ransacking his house making vulgar comments about the voluminous books that were present in his household. Then they pried into his study material that was used for his Ph D and started commenting on that too.

Finally when the teachers started gathering before the house and the media got curious the raiding party left after three and half hours taking away his hard discs, laptop, computer, pen-drives, 3 mobile instruments, 2 SIM cards, booklets and magazines, old copies of People’s March which is a registered magazine, booklet on Kishenji after his killing brought out by intellectuals, Arunatara the organ of the Revolutionary Writer’s Association, Andhra Pradesh, most issues of Jan Pratirodh, organ of Revolutionary Democratic Front in which Prof. GN Saibaba is the Joint Secretary.

All the previous addresses of the houses in which Prof. Saibaba had stayed before shifting to this quarter in the North Campus were listed as places from where “stolen property” can be” recovered”! From the wording of the search warrant itself it is evident that since the police doesn’t have any other argument to show for this act of highhandedness they have got this order sanctioned by the magistrate with the lame pretext of seizing “stolen property”. What is the “stolen property” that can be “recovered” from a known academic, public intellectual, who is politically active and is residing in Delhi? And the seizure list that has been mentioned above also reveals the nature of the “stolen property” that was “recovered” from the premises of Prof. GN Saibaba.

If a learned academic of Delhi University can be treated so brazenly with a wonder document like a search warrant to recover “stolen property”, it is high time that tomorrow anyone can be harassed and even framed with a factious document like the above mentioned search warrant that is nothing but the figment of imagination of a criminal police out to incriminate anyone who dares to speak against the state. One need not mention what his teenage daughter might have gone through while the 50-member team run rough shod of their house. One is forcefully reminded of the days of emergency when such acts of terror of the police and the intelligence were the order of the day.

One is once again reminded of the plight of the adivasis in deep interiors who have been surrounded of hundreds of thousands of paramilitary as part of raiding their households so as to browbeat them to submission.  Increasingly and quite alarmingly this is being re-enacted on a day to day basis in various urban centres on people’s intellectuals/activists as an act to weed out all dissent that is taking shape here amidst increasing desperation of the people who are at the receiving end of policies of a state that has brought increasing miseries for them. As we have mentioned time and again this is the manifestation of the heights of impunity of a penal system teethed with draconian laws trying to tame in desperation the increasing indignation of the people.

CRPP condemns such authoritarian, arbitrary acts of the joint team of NIA-Special Cell-Aheri Police-Local Police on Prof. GN Saibaba and his family. This act which is at best an incriminating one is primarily intended to implicate Saibaba and his family in the case of Hem Mishra. As they don’t have anything to show before the court the desperate police and intelligence agencies are resorting to criminal ways of implicating people who are fearlessly opposing the fascist policies of the Indian state against the most oppressed and exploited in the subcontinent. We call upon all democratic and progressive forces to stand united against such fascist, brazen, anti-people assaults on our freedoms!