INDIA: Organizations from All Over India Issue a call for a Protest Week, August 28 – September 5 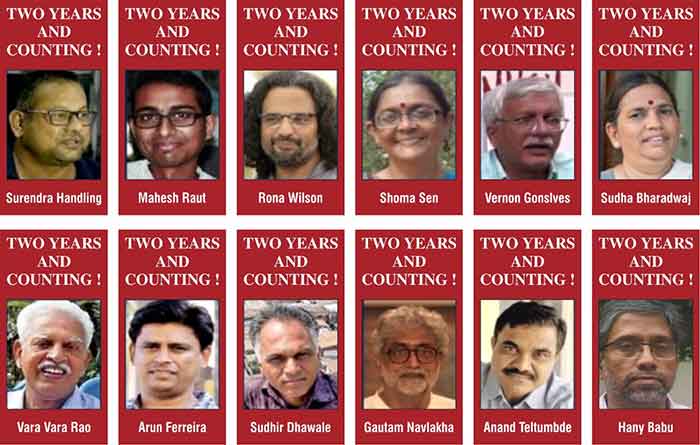 **NATIONAL CALL FOR A WEEK OF PROTEST**

STAND UP FOR CIVIL LIBERTIES

As representatives of human rights organizations and people’s movements from around the country, we are alarmed at the increasing assault on fundamental rights of people who chose to voice their opinions, to openly oppose government policies, and to organize themselves into peaceful protests.

• More than 12 renowned lawyers, professors, academics, writers, activists are in prison in the Bhima Koregaon Conspiracy Case, some of whom have been in prison for over two years now,

• More than 20 anti CAA-NRC protestors and supporters of the movement for equal citizenship, have been falsely arrested under UAPA, for conspiracy and several others under stringent sections of the IPC and other special laws,

• In UP, anti CAA-NRC protestors are being subjected to illegal processes of auctioning of their personal properties to pay for the damages to public property caused during protests,

• A leading anti-corruption crusader has been convicted under the Contempt of Court Act,

• Numerous journalists face charges for pointing out problems with government policies and their implementation, and many of them have been arrested,

• Scores of intellectuals, activists, trade unionists and others are continually being summoned, examined in the Delhi Riots case and the Bhima Koregaon case, and then subjected to vilification campaigns with a section of the media, ensuring that the process itself becomes a punishment, even as these cases will fail in trials,

Our silence is our complicity in all these shameful acts of oppression.

We are calling upon all to RISE UP IN RAGE!

September 5 will be the third anniversary of the assassination of Gauri Lankesh, the fearless journalist who would not be silenced any other way.

We must raise our voices against this, we must be heard.

Organize protests wherever possible, be it groups of 5 or 50. Stand with a placard. Write letters to the authorities. Share photos, videos, tweets. Organize meetings, big or small.

• Forum Against Oppression of Women

• “Please Save Me” Foundation