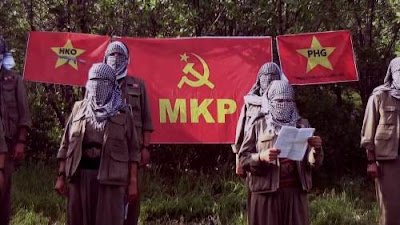 MKP Political Buro made a written statement saying that '' Our Party is in the face of the fascist occupation is undoubtedly beside the Afrin people  and the Kurdish nation. '' We share our clarification by e-mail because of its importance.

NEWS CENTER- (23.01.2017) - MKP Political Buro made a written statement saying that '' Our party is in the face of fascist occupation is beside Afrin and Kurdish nation. ''

The  aggression of the Turkish ruling classes is a military invasion. This occupation is a racist-fascist criminal offense in the context of international law and the law of the sovereign state, as well as the right to sovereignty of the Kurdish state, especially in the Western Kurdistan Kurdish administration,  it is a criminal offense for interfering with other countries' domestic affairs. Erdogan and the  ruler, who murder civilian people and children in the occupation movement, continue to commit crimes by crimes of humanity.

Our party is unquestionably opposed to the fascist occupation of  Afrin and the Kurdish nation!

Resistance and struggle against the aggression of the racist-fascist military occupation carried out by the ruling classes of the Turkish ruling class and Erdogan is a revolutionary responsibility and duty.

All our peoples and progressive forces must raise their voices against this occupation, the revolutionaries and the Communists must fight against the occupation with the duty of direct struggle.

It is a revolutionary  historical  responsibility for the Communists. The practice of unifying  the resistance and struggle of the Kurdish nation everywhere and supporting its wars is the concrete attitude of this responsibility.

The responsibility of the Ephrin massacre is the Putin Russia in the second rank, while the first is the power of the "ÖSO(free Syrian army " who turns to Erdogan's power and its puppetry. Of course, imperialist outlaws like the US are other partners of the same crime, dragging the region into chaos and wars for the sake of regional strategies and reactionary interests
The tradition of-military annexation of the Ottoman Empire is to be continued by adapting to the conditions of the present day by the single man-sultan of the single-fascist Erdogan who emulates the new Ottomanism. The Erdogan  attacking Afrin, who saw no attitude from Putin, dared to attack .

It is understood that the fascist occupation movement will be relatively limited and narrow-time when it is open to the military character. It seems that the permission from Putin Russia is at this limit.

It is clear that Russia will not let other initiatives and reactionary interests take risks by emptying Afrin.

It is therefore likely that the Turkish ruling classes have allowed military occupation limited permission and that the PYD-YPG has allowed an attack against the military center and the weapons warehouse. However, the scope of the military occupation aggression is limited, and a certain period of shelter does not mitigate its fascist character, nor to limit or kill slaughter and crime.

Erdogan's ruling will surely take over the occupation and massacres that the Kurdish nightmare has embarked on.

Those who enter the reactionary war will receive a response with revolutionary wars.

Putin Russia, on the basis of imperialist character and reactionary interests, allowed the occupation to commit massacre, and this crime against the Kurds added a new link to the history of imperialist barbarism. All kinds of imperialism and Russia will be overwhelmed by the tempest that it raises imperialism, the war that it provokes and the aggression it carries out ...

Afrin and the Kurdish Nation are not alone!

Struggle against the Afrin Occupation of the Kurdish Nation!

Any translation mistakes are responsibility of DCS not MKP