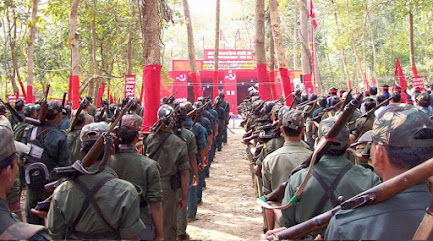 Communist Party of India (Maoist), once again, conveys Red Salutes by extending revolutionary greetings to all those, in Delhi and all over India, who are resolutely, continuously and unitedly struggling for repealing the three anti peasants laws of the Modi government. We fully welcome with warm spirits, the 'Tractor Rally' carried out by them on 26th January 2021.

On 26th January, lakhs of peasants in tractors marched to Delhi and exposed to the world how biased and anti farmer, this sham 'Republic Day' of India is. Even if after giving permission for the rally, the government had been, via police, consistently trying to stop the farmers from carrying it out. They barricaded the routes. Tear gassed. Lathi Charged. Navrit Singh, a youth was dead. Law and order is the responsibility of the government. They tried their best to convert the peaceful March of the farmers into a violent one. In fact they had been trying from start to infiltrate the peasants struggle to split it or create confusions. They succeeded in infiltrating BJP agents Deep Sidhu and Lakha Sidhna in the Rally. Even after tight security arrangements these agents were allowed to proceed towards Red Fort. Allowing them to proceed to Red Fort, hoist there flag, create ruckus and paint the tractor rally as violent and then foist false cases on in its leaders are a part of the conspiracy of the Brahminic hindutva fascist Modi government. We condemn this cheap and repressive tactics of the government. We appeal to the soldiers and the police to maintain balance and stand in support of the farmers, as they too are the sons and daughters of farmers.

This Rally has exposed the double-dealing hypocrite Modi who masquerades as 'Principally Servant of the People'. The truth that he is not the 'Principal Servant of the People of India', but is in fact the obedient servant of the Imperialists and the comprador corporate houses, has come out openly. With an unreconciling stand towards repealing the laws you have through your unity and firm resolve has smashed all tricks to manipulate you to some sort of negotiation. Still there are some forces outside of the United Front. We appeal to all of them to understand the necessity of the situation and join hands in the fight to repeal the laws.

The Modi government is stealing the morsel from the mouth of the poor by handing over procuring and hoarding rights to corporate Adani and Ambani. They are tightening the noose around the farmer's necks by starting private markets and making provisions to hand over the lands to the corporate. This law is a decree to snatch the livelihood of the small businesses and traders. It is not just the peasants but 80% of the ordinary citizens who will be badly affected by this law. Hence we appeal the vast masses to join the struggle. In the areas of your work carryout consistent struggles in support, and force the government to repeal these laws. We appeal all the people to protest and demonstrate at different places all over the country in support of the call by the Farmers United Front to gherao the parliament on Feb 1st 2021 and other programs we call on the Maoist party caders, PLGA, revolutionary organisation, other organisations and Revolutionary People's Communities (RPCs) to carryout various struggles in support of All India militant movement and against the 3 - laws. As a continuation of this follow it up on 10th February (on Great Bhoomakal Day) all over the country.