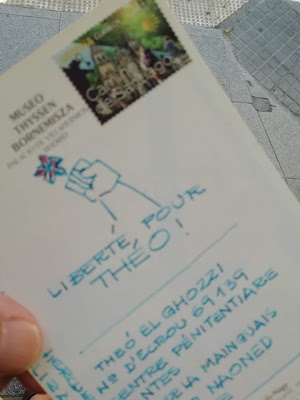 We learn from the press the arrest in Nantes of a 27-year-old man suspected of being the author of a graffiti on the housing of the wealthy François De Rugy, claimed by the Maoist Communist Party. There will have been more reactivity for an unfortunate tag on the facade of a house than to look for the body of Steve Caniço after the police charge of June 22 in Nantes, or to have an answer about the death of Aboubakar Fofana, killed more than a year ago in the Breil district: the CRS quoted in the case has still not been heard.
Police and justice thus demonstrate where their real concerns are. That is to protect the powerful, the rich who degrade our living conditions while bathing in an indecent opulence.

This arrest, which occurs in a local context marked by the violence of the police, whose acquaintances with the extreme right are no longer to be proven, contributes to further darken the image of justice and police two-speed, which for some years have made this part of Bretagne an experimental zone of unbearable repression against youth, rebels of all kinds, activists and all those who struggle for a more just world.
We therefore demand the release and the abandonment of the prosecution against this young communist activist who in all our solidarity.