TURQUIA: TKP/ML TIKKO DERSIM REGIONAL COMMAND: Their trenches will not be empty, their weapons will not be silent, we will win with them! Comrades Nubar, Özgür, Rosa and Asmin are Immortal! 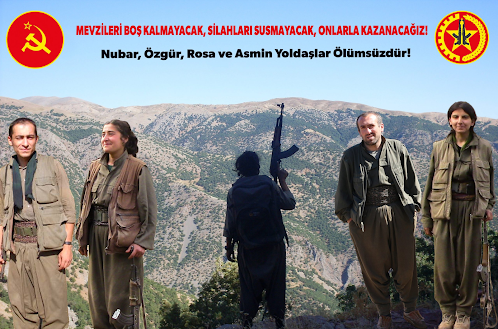 In these days, when the fascist Turkish state has turned to the total destruction of the Guerrilla War with all its technical, technological and ideological attacks, we sent off four People’s Fighters from the Leader cadres of our Party, the military staff of our war, and the courageous militants of the People’s War to immortality. On September 6-9 and October 1-4, enemy forces heavily bombarded Büyükköy and Hacıbirim countryside in Ovacık with Cobra helicopters, armed UAVs and warplanes. In these attacks, one of our Party’s Leader cadres, our Regional Political Commissar Erol Volkan Ildem (Nubar), our Dersim Regional Commander Ali Kemal Yılmaz (Özgür), one of our unit commanders Fadime Çakıl (Rosa) and People’s Fighter Gökçe Kurban (Asmin), were immortalized.

While the loss of comrades Nubar and Rosa has yet to heal, the loss of comrades Özgür and Asmin, who were in the area for a special mission, doubled our pain, anger and sense of revenge. These losses, which we have suffered as a result of the enemy’s attacks on our guerrilla units in a one-month period with the most advanced technological equipment, numerical superiority and intelligence network, are very heavy, but we declare once again that our comrades’ trenches will be filled with our will to war, our historical experience and our belief in victory.

We are aware that our enemy is tactically strong. We do not underestimate this. However, with the creative tactics of the Guerrilla War, our belief in our strategic line, our Party leading it and our working class and working people, the subjects of the war, we also claim to reverse this. Let our enemy cry of victory with the results it received with the armed UAVs, Helicopters and Warplanes! Let them shout as much as they can, saying “we finished them”, “we are finishing them”! We will pop their bubble! We will throw the declaration “They are done”, “Exhausted” in the garbage of history by taking the revenge of our comrades, striking the enemy, developing the war and getting stronger!

We are going through a difficult process. Both the all-out attacks of the enemy and the liquidator attacks increase this difficulty even more. However, we have the power to confront this challenge. We are not strangers to these losses, and we knew how to walk our path more confidently, binding up our wounds each time. Comrades Nubar and Özgür were among the most concrete examples of this. Their daring and assertion to assume the political and military leadership of our Guerrilla War after our five red carnations (five women martyrs on February 2, 2011) gives us strength. Just as they shoulder responsibility without hesitation after February 2, it is now up to us to undertake this task.

Comrade Nubar (Erol Volkan Ildem) was pondering on the problems of war in the guerrilla field from 2009 until the date he became immortal, and in 2011, undertook the political leadership mission he took over from Comrade Eylem (Sefagül Kesgin). There was no place for pessimism or despair in him. He was able to find a way out even in the most desperate moment, to dispatch his comrades and to undertake a pioneering mission in military matters with his judgment skill. Where he was, there was trust. Where he was, there was enthusiasm. Wherever he was, there was a claim.

Comrade Nubar, who was in a decisive position in the ideological-political-organizational and military formation of the guerrilla area especially after February 2, played a first-degree active role in the defeat and failure of the right-liquidationist attacks against our Party in the guerrilla area, and almost the entire guerrilla area took sides of the party due to him who played a key role with a position in line with the leadership mission. In his own words, the motto “the essential is to reveal the tasks of the class struggle and the revolution and to be equipped to fulfill these tasks” corresponded him all his life.

Comrade Özgür (Ali Kemal Yılmaz) joined the guerrilla from the ranks of Komsomol in 2007. He became a commander in a short time and took his place among the military staff of our war. Comrade Özgür, who was a member of the Dersim Regional Command from 2011 until his immortalization, became the Regional Commander after 2017. He took part in the organization and command of many military actions. He knew how to lead his comrades without losing faith and determination even in the most difficult times. Comrade Özgür, who occupies a great place in the guerrilla with his enthusiasm and joy, also came to the fore with his strong relations with the masses, mobilizing them and organizing them according to the needs of the war.

Comrade Rosa (Fadime Çakıl) joined the guerrilla from the ranks of Komsomol in Dersim in 2013 when she was only 17 years old. Feeling the suffering of the people deeply in her heart, the comrade quickly developed herself militarily and politically, knowing to turn this into hatred for the enemy. Comrade Rosa, who took part in many military practices, assumed the role of Unit Commander from 2016 until her immortalization. After the immortalization of comrades Çiğdem and Nergiz in 2018, she was appointed to the Party Women’s Committee of TİKKO and assumed the leading role in women’s participation in the war.

Comrade Asmin (Gökçe Kurban) joined the guerrilla at the age of 17 from the ranks of Komsomol in Dersim, just like Comrade Rosa. By adapting to guerrilla life in a short time, she quickly developed herself according to the needs of the war. Comrade Asmin, who came to the fore in the struggle for women to become a subject in war, was at the forefront of many military practices with her determination and enthusiasm. Even in the most difficult moments, she managed to keep the hope alive with the liveliness and joy.

Now we took over the daring to devote herself to the fight from the Comrades Asmin and Rosa, who fell into the same ambush with Comrade Şerzan (Hasan Ataş), who became immortal in Ovacık on June 2, 2020. They clashed with the enemy, split the circle, took over Comrade Şerzan’s flag, and took over the duties of the moment more tightly.

In these days, when the attacks of fascism are experienced in their darkest form, and even breathing is turned into a torment, the slogans of the fight of our immortal comrades shouting from the mountains are heralding of a new life by the death.

Now is the time to shout the slogans of our comrades with a louder voice, raise their flag higher, and hand over their weapons to new hands. The process has shown us once again that we have no way but to fight. For this, it is time to strengthen the Guerrilla War, which is the current task of the People’s War, and to turn the “war of survival and resistance” stated in the 1st Congress of our party into strong trenches.