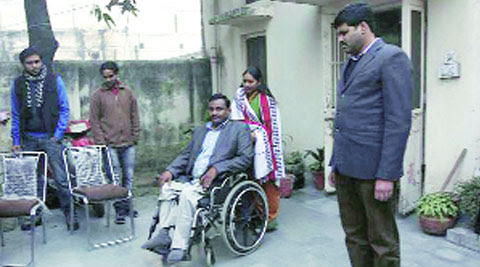 Dr, G N Saibaba, Delhi University Professor, who has been in incarceration since 9th May, 2014 has commenced an indefinite hunger strike from 11-04-2015 demanding proper medical treatment and food, both of which are being denied to him by the authorities of the Nagpur Central Prison.

Dr. Saibaba, who is presently lodged in the notorious Anda Barrack of the Nagpur Prison has been denied bail twice by the Sessions Court, Gadchiroli and once by the Nagpur Bench of Bombay High Court. In the last order by the Sessions Court dated 4th March, 2015 the Sessions Judge referred to the reports of the Superintendent and the Chief Medical Officer of the Nagpur Central Prison which, while admitting the delicate medical condition of Saibaba, stated that he was being treated at the Government Medical College Hospital as well as the Super Speciality Hospital in Nagpur and that they were providing food supplements as per his medical requirements. It was on the basis of such reports that bail on medical grounds was denied to Saibaba.
However, despite such claims by the prison authorities made before the court, the prison administration has not only continued to deny him proper medical treatment and food supplements, but also now even stopped certain items that were earlier allowed to him.
Faced with a situation of a steady deterioration in his health condition, Saibaba has decided to protest and has completely stopped taking food from Saturday.
His lawyers, who met him on Monday, 13th April, 2015, immediately submitted a memorandum to the DIG (Prisons) East Region, the prison authority under whose jurisdiction the Nagpur Prison falls. The official however merely received the memorandum and refused to respond to the issues raised by Saibaba. He did not even indicate any willingness to allow the essentials that the prison report to the court has stated that they were providing.
Publicado por dazibao rojo en 9:53 p. m.