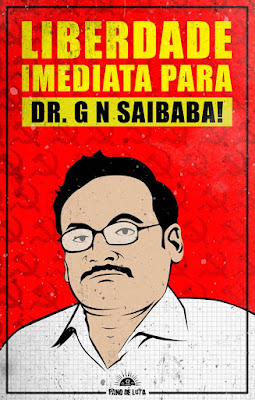 On February 29, 2016, I sentyou a written question E-001822-16about the situation of imprisonment  that Professor GN Saibaba was suffering in India, to which you replied that the EU "The EU has been closely following cases of human rights defenders arrested in India, including the cases of professor Saibaba, accused of having links with Naxal militants, and of Ms. Arundathi Roy, accused of contempt of court for her article defending the cause of Professor Saibaba. The EU Delegation in New Delhi has made appeals on humanitarian grounds with the National Human Rights Commission.
The EU attaches great importance to the issues at stake, most importantly to the freedom of expression, the right to a fair trial and the rights of human rights defenders. These issues are also addressed at the EU-India human rights dialogue.”
On March 7, 2017, Professor GN Saibaba has been condemned to life imprisonment with five other activists, all of whom have reported torture under police custody. The accusation is based on carrying out "illegal activities" under a draconian law called UAPA, denounced by all human rights organizations in India and internationally as a law that aim to prevent the exercise of freedom of expression and conscience.
Professor GN Saibaba, as you may know, has a 90% physical disability, aggravated in recent months with acute pancreatitis, and he was recommended the removal of his gallbladder. Because of this, this life imprisonment sentence is actually a death sentence for this professor, who has done nothing but defend the rights of the Adivasis and Dalits people with words, as well as denounce the counterinsurgency strategy "Operation Green Hunt”.
We are addressing you to ask the European Commission to adopt necessary measures to prevent GN Saibaba imprisonment, and call for all legal guarantees to be respected under the highest human rights standards for him and the rest of prosecuted people.
If this does not happen, and in line with the human rights advocacy that EU is committed to, we think it would be timely to halt all EU agreements with India.
Sincerely yours,
Publicado por dazibao rojo en 12:36 p. m.