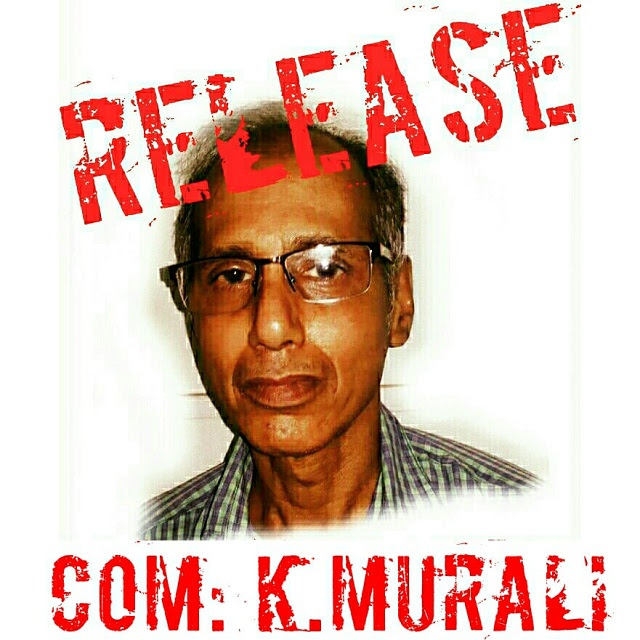 ʹAs we understand from the coordinators of the Kochi-based Council for Advancement and Protection of Constitutional Rights in India (CAPCRI) the world-wide plea raised for medical care and release of K Muraleedharan has not met with a positive response from the government and the courts. We stand with CAPCRI in its renewed and more intensified attempt to secure the release of Muraleedharan and join with Gayatri Chakravarthy Spivak, Judith Butler, Noam Chomsky, Partha Chatterjee, Amiya Kumar Bagchi and several others, who have already affirmed their support for the cause.
Muraleedharan, radical scholar and social activist, was arrested by Maharashtra Police on May 9, 2015, charged under the provisions of the Unlawful Activities Prevention Act (UAPA) and lodged in the Yerawada Jail, Pune. The security agencies are purposively delaying the trial of Mr. Muraleedharan by failing to produce him in court, thereby denying him even an opportunity for bail. He is detained in solitary confinement in the infamous high-security prison block, the Anda Cell and is being denied free access to reading material. His friends and intellectual associates are denied the opportunity to visit him. The health condition of the 62-year old Mr. Muraleedharan, a cardiac patient who had already undergone a bypass surgery, has been a matter of deep concern to his friends, relatives and well wishers. Even against the severity of confinement and failing health, Muraleedharan has been striving to pursue intellectual activity; he has newly acquired a level of proficiency in the Marathi Language even to write scholarly articles. He has already authored a few manuscripts but publishing these poses many hurdles in the form of scrutiny by the jail authorities and grant of permission.
The action of the jail authorities is against the fundamental rights guaranteed under the Indian constitution, the principles enshrined in the Universal Declaration of Human Rights and the United Nations Convention against Torture. The inordinate delay to commence trial in the case is a deliberate attempt to deny justice and against the very fundamentals of modern jurisprudence. His present mode of confinement prevents the society from benefiting from his labour as an organic intellectual. We therefore demand that immediate steps should be taken for producing Muraleedharan in court, assuring him a transparent trial, and granting him bail. In the meantime, he should be allowed to seek medical treatment in a specialist hospital, all restrictions imposed on him to access reading materials and to publish his manuscripts should be lifted and should be allowed to receive in jail friends and intellectual associates as visitors."