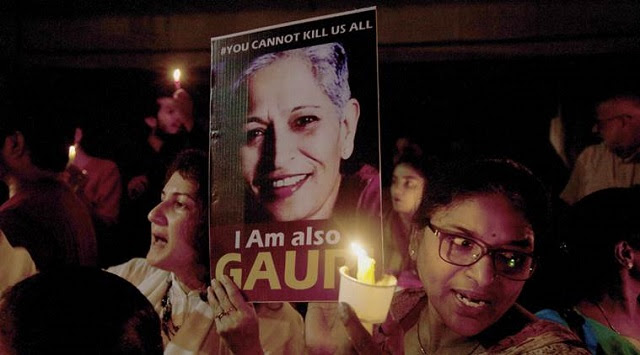 The Communist Party of India (Maoist) has rejected the ʹpropaganda by Hindu fascist forcesʹ that Kannada journalist Gauri Lankesh was killed by Maoists. It said that the ʹSangh Parivarʹ killed Lankesh to muzzle the voice of pro-people forces.
In a release issued by Abhay, spokesman for Central Committee of CPI (Maoist), said, ʹThe party strongly condemns the murder of Leftist, pro-people, progressive and democratic journalist Gauri Lankesh by Brahminical fascist goons of the Sangh Parivar protected by the BJP government at the Centre. The party appeals to all like-minded forces to hit the streets for a determined fight against the forces that killed Lankesh.ʹ
Observing that Lankesh fearlessly campaigned for the downtrodden and the marginalised, against atrocities on minorities by Hindutva forces and corrupt governments, the party has said, ʹLankesh had become an eyesore for the Hindutva forces ever since she had translated the book ʹGujarat Filesʹ by Gujarat journalist Rana Ayyub exposing the involvement of Narendra Modi and Amit Shah in the Muslim carnage in 2002. She had printed the matter in her publication in Kannada language. The fascist Hindutva hand was evident from the fact that BJP leader D N Yuvraj had said that she would have been alive had she not celebrated the death of RSS people.ʹ
The CPI (Maoist) also targeted PM Modi for his silence on her murder which it says was ʹindicative of the Hindutva hand in her murderʹ. ʹIt is their lowly and dirty act to pressure and get her brother to hint at the possibility of Maoist hand in her murder,ʹ the release further says.
The party has rubbished the probe ordered into Lankeshʹs murder saying, ʹwhen the rulers themselves are complicit in it, everybody knows what is going to be the outcome of such a probe. That is the reason, till now, there has been no headway in the probe in the murders of rationalist Narendra Dabholkar, Leftist thinker Govind Pansare and progressive writer M M Kalburgi.ʹ
The party called for intensifying struggle against ʹfascist Hindutva forcesʹ by all progressive and democratic forces beyond ʹsymbolic protestsʹ with ʹnow or neverʹ urgency.
Publicado por dazibao rojo en 1:35 p. m.