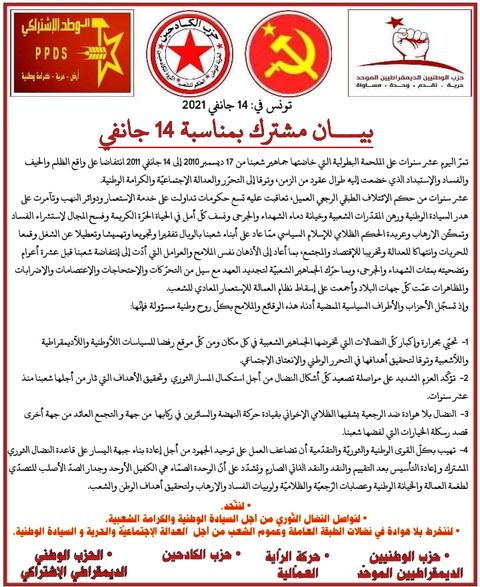 Joint statement on the occasion of January the 14th

Ten years have passed since the heroic epic led by the popular masses from December 17, 2010 to January 14, 2011, an uprising against injustice, corruption and tyranny to which they have been subjected for decades, driven by a desire to liberation, social justice and national dignity.

Ten years of reign of the reactionary puppet class coalition, during which succeeded nine governments which worked in the service of colonialism and the forces of plunder and conspired to squander national sovereignty and sell the wealth of the people and betray the blood of the martyrs and the wounded and destroy all hope of a free and decent life and pave the way for widespread corruption and the installation of terrorism and the dark rule of political Islam which has led our people to suffer from the poverty, famine, marginalization, unemployment, repression of freedoms, violation of justice and sabotage of the economy and society, which recalled the same characteristics and factors that led to the uprising of our people ten years ago and at his sacrifice of hundreds of martyrs and wounded, and what prompted the popular masses to renew the struggle with a torrent of movements, of protestations, sit-ins, strikes and demonstrations spread across all regions of the country and who unanimously opted to bring down the anti-popular system and the joke of colonialism

And while the signatory parties and political forces below record these facts and characteristics with a responsible patriotic spirit, they express this:

1- warmly welcome all the struggles led by the popular masses everywhere and in all places ، who reject non-patriotic, non-democratic and unpopular policies with the desire to achieve their goals of national liberation and social emancipation

3- fight fiercely against the reaction in its two forms, the Dark Brotherhood, led by the Ennahda movement and its allies on the one hand, and the Destourien rally which is back on the other hand, whose goal is the recycling of political options that our people rejected

4- they call on all patriotic, revolutionary and progressive forces to redouble their efforts to unify the actions to rebuild the left front on the basis of the common revolutionary struggle and to reestablish it after a rigorous evaluation, on the basis of the critics and the self-criticism, and stress that strong unity is the only guarantor and the most solid wall to confront the junta of reaction and national betrayal and the reactionary and oppressive gangs, the lobbies of corruption and terrorism, and to reach the goals of the homeland and the people.

ـ Let us continue the revolutionary struggle for patriotic sovereignty and popular dignity.

ـ Let us engage tirelessly in the struggles of the working class and the population in general for social justice, liberty and national sovereignty.