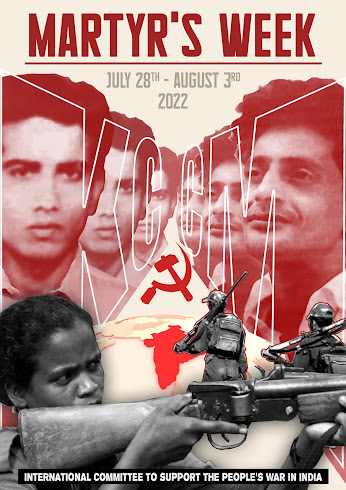 The International Committee to Support  the People's War in India calls on the entire world proletariat, revolutionary and democratic organizations to actively participate in the week of martyrs called by the Communist Party of India (Maoist) from July 28 to August 3rd.

In this important week, we call to carry out all kinds of actions according to the national and local conditions of each case, which demonstrate our proletarian solidarity with the People's War in India and our stromgest opposition to the fascist and genocidal Modi’s regime and its new offensive genocidal “SAMADHAN-Prahar.

- Red salute to the founding leaders and teachers of our party, Comrade Charu Mazumdar and Comrade Kanhai Chatterjee! Red salute to all martyrs!

- Fight against the imperialist proxy war in Ukraine!

- Oppose the deployment of Indian army in areas of revolutionary movement!

- Work with the aim of developing Dandakaranya, Bihar-Jharkhand, East Bihar and North-East Jharkhand as base areas.

- Intensify and expand the guerrilla warfare, the people's war.

- Down with imperialism, bureaucratic capitalism and feudalism!

International Committee to Support the People's War in India (ICSPWI)