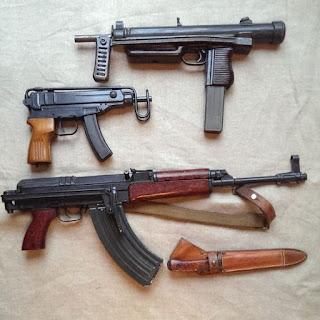 An utter lack of knowledge on laws and possibilities in imperialist countries
Sison writes:
“By the current constitutional and legal standards of the industrial capitalist countries that pretend to be liberal-democratic, any individual can legally acquire firearms for the purpose of sport and self-defense against criminals as well as against the potential of the state to become tyrannical and oppressive.”
Again, what countries is Sison talking about? This is by no means the situation in Europe. In most European countries there are strict gun laws, and it is far from being an option for “any individual” to acquire firearms for self-defence! By all means, there are legal possibilities in many countries and revolutionaries can take use of them. But this statement again show a gaping lack of precision in Sison’s knowledge.
Sison writes:
“It is therefore possible to organize proletarians with firearms as sporting gun clubs,  as community self-defense organizations and as voluntary security for public events and structures.”
We must disappoint Sison, if he cares to read our short text, with the fact that this is considered a criminal offence in most of Europe. And was it not illegal, we might speculate that the “huge army” Sison spoke of earlier, could choose to act as if it was, if armed proletarian gun clubs where organized in large scale by a revolutionary movement!
The theory also remind us of Trotsky’s transitional program and his advocating of Workers Militias in the factories. Neither Trotsky nor Sison has ever tried to organize such gun clubs or militias in Europe, but this is a very poor and naïve alternative to the People’s Army we need for waging People’s War. Done in the open or semi-openly and in the framework of legalism, it will be almost defenceless against state prosecution and repression. The proletariat needs its army. Militias should be formed and integrated into the army, but this is not possible inside a legalist framework of protracted legal struggle.

Is it wise or opportunist to hide our intent?
Sison writes:
“It is wise for the revolutionary party of the proletariat not to declare publicly the intent of building a people’s army before the conditions are ripe for armed revolution.”
Again, the typical opportunist is at work. This is also something we heard many times before. So called revolutionaries saying “we should not declare our intent publically”, but who are they fooling? If this is a real intent, stated internally, it is quite hard to keep the secret from the intelligence services. At least if the Party is as loosely and legally organized as Sisons friends in some European countries. Is the purpose to hide our intent from the masses? To hide the necessity of building a People’s Army from the People themselves?
Who are to be fooled by this hidden intent? By this “wiseness”? We dare to propose, that the only ones being fooled, are the honest revolutionaries that believe the opportunists have any intent of building a People’s Army. Fooled by Sisons concessions by advocating gun clubs and political and practical exchanges with the revolutionary wars in the oppressed countries. Fooled by prestige more than content, because the content is old and in the same tune as the one played in every opportunist reformist group in the west.
The plan to dogmatically repeat what they conceive as the October path of Lenin, more than 100 years later and against an enemy that has studied insurrection and how to beat it for just as long, as some kind of surprise attack, is extremely naïve. Criminally naïve, if applied as a real strategy by a self proclaimed Communist Party.
On the question of hiding our intent, the great first teachers of Marxism, Marx and Engels, has answered this in the only Communist way already in the Communist Manifesto:
“The Communists disdain to conceal their views and aims. They openly declare that their ends can be attained only by the forcible overthrow of all existing social conditions. Let the ruling classes tremble at a Communistic revolution. The proletarians have nothing to lose but their chains. They have a world to win.”
Compare this daring statement with the “wise” advice of Sison of waiting for ripe conditions to declare our intent…
Also, let us note that Sison talk about proletarian revolutionaries, not Communists, and about the party of the proletariat and not the Communist Party. This is in our point of way not the most correct and clear language for this matter.

Even the imperialists understand the universality of People’s War
Let us leave Sison and listen to Dr. Thomas A. Marks, a yankee political risk consultant working in the business of counter-insurgency:
“In any discussion of insurgency, the works of Mao Tse-tung are unavoidable. His innovations resulted in “people’s war,” a formulation that lifted the asymmetric challenge from the tactical and military to the strategic and political. Mao was to irregular war what Napoleon and Clausewitz were to regular warfare.”
And:
“To the contrary, as Mao made clear time and again, violence is integral to all phases of insurgency. It is merely used at a level appropriate to the situation to eliminate resistance and government presence so that insurgent politics can produce mass and resource mobilization.”
And:
“The FARC case illustrates that, whether Maoist or not, insurgencies must pursue the Maoist strategic essentials as realized in operational art.”
Bourgeois intellectuals specializing on guerilla warfare and insurrection often refer to Mao in this way. His theory of People’s War is not referred to, by them, as peasant war or “encircling the cities from the countryside”. It is referred to as lifting guerilla warfare to a strategic level and synthesising the laws of irregular or asymmetric or guerilla warfare. What bourgeois experts understand, many revolutionaries fail to grasp; People’s War as synthesised by Mao Zedong is universally applicable in all countries of the world. It is the only military strategy of the Proletariat, and thus of the oppressed masses of the World. 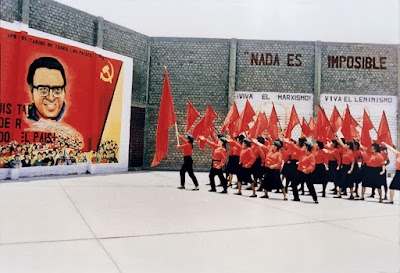 The People’s War is an essential and integral part of Maoism
Further on, the Communist Party of Peru wrote in its International Line:
“In the face of this situation, in 1979, at the PCP’s First National Conference, President Gonzalo called upon the whole party to defend and apply Marxism-Leninism-Mao Tse-tung Thought against the revisionist triple assault. The Party’s principled positions remained firm and unalterable. In 1980, the PCP launched the People’s War based on Marxism-Leninism-Mao Tse-tung Thought. And it is with the application and development of the People’s War that the PCP has advanced further in the comprehension of Maoism as the third stage of Marxism. Hence, at the Second National Conference held in May 1982 the Party agreed that Marxism-Leninism-Maoism was the third stage of Marxism. The PCP was the only party in the world in the vanguard of the defense of Maoism, assuming the task of struggling for the unity of the Marxist-Leninist-Maoists of the world so that this ideology be the command and guide of the world and Peruvian revolutions.”
This is the line put forward by chairman Gonzalo and the PCP, a red line in the International Communist Movement, to struggle for the unification under Maoism. Let us emphasize the statement that Maoism was comprehensed only through the People’s War in Peru and that the PCP was the only Maoist Party in the world in 1982. This is completely true. What is important is not the word, but the content, and the content of Maoism was not clearly stated before 1982 and then only by the PCP.People’s War is an integral part of this third and higher stage of the Ideology of the Proletariat; Marxism-Leninism-Maoism, principally Maoism.
It is good that Sison put forward his line, even in a cowardly and mediocre way. It makes for another good opportunity to put forward the correct line of Protracted People’s War in each and every country as the only path to communism. The counter-arguments are well known to us and has been answered many times, but they are not to every revolutionary. Now, they can see for themselves, what is put forward against People’s War, what is the “alternative”, and they can for themselves evaluate if this is a victorious path, or just the same old goose step down to the swamp of reformism, opportunism and parliamentary cretinism that so many of our forerunners have made only to drown in this bitter muddy water.
Let us also recommend the following three great texts which is very relevant to this topic, not only to highlight the strategy of People’s War, but on the question of how to view Chairman Gonzalo and how to evaluate the October Revolution of Russia from our higher viewpoint today, conquered due to Maoism.
Redaction of Klassenstandpunkt, German Federal Republic: People’s War – The sole path to liberation http://www.demvolkedienen.org/index.php/en/t-theorie-en/2259-klassenstandpunkt-people-s-war-the-sole-path-to-liberation
Maoist Communist Party, French state: To defend the life of Chairman Gonzalo is to defend Maoism! http://www.demvolkedienen.org/index.php/en/t-dokumente-en/1778-pcm-to-defend-the-life-of-chairman-gonzalo-is-to-defend-maoism
Revolutionary Front in Defence of the People’s Rights, Brazil: Long Live the Shining October Path! http://www.demvolkedienen.org/index.php/en/t-dokumente-en/1852-long-live-the-shining-october-path
This is expressions and examples of the great efforts of the red line to forward the line of Gonzalo, to promote and propagate the line of the PCP and to give a new impulse to the International Communist Movement. It is expressions of how the red line gives guidance and support to Maoists in the whole world, and why Maoism is advancing now also amongst revolutionaries in the Imperialist countries. The efforts must be saluted and studied by every Maoist.

The red line will unite the International Communist Movement under Maoism
This response to Sisons text is made in a hurry. The question of People’s War has been investigated and formulated a lot more thorough many a time, for example in the three texts above, and especially in the great documents of the Communist Party of Peru. It is written polemically, but it is not written with any disrespect of the Communists and Fighters of the Philippines.
For 50 years the Communist Party of the Philippines has waged a glorious People’s War. Communists and Masses have shed blood as a living and struggling part of the World Proletarian Revolution. It is not only a practical contribution to the International Communist Movement, but again proof of the invincibility of People’s War and the universality of the People’s War. The People’s War of the Philippines is one of four People’s Wars in the World today, and thus it is important and deeply cherished by every true Communist. We wish for it to develop further and to succeed in wiping away the old state, for New Democracy, socialist transition and cultural revolutions till Communism. As long as the fire of People’s War is burning, however meek the fire might become in periods, we salute the fire and celebrate it.
This hope and support is unwavering, whatever José Maria Sison might recommend as wise or flexible, but such support cannot and must not put a lid on the two-line struggle. Unprincipled unity is an expression of the black line, the bourgeois line, the line of liquidation and revisionism. Two-line struggle must be waged without fear of being out of order, because we know it to be a struggle of life and death for the World Proletarian Revolution.
The red line of the International Communist Movement upholds as true the fact that Maoism is the third and higher stage of the Ideology of the Proletariat and that People’s War is universally applicable in each and every country. This is the position of the left, this is the correct position proven true again and again, this is the position that will prevail and is already uniting the International Communist Movement under one glorious banner for the first time in ages.