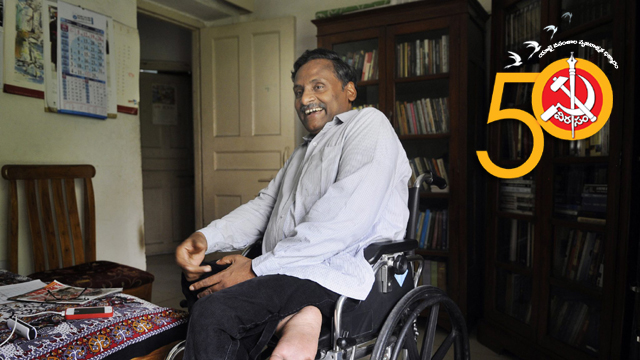 Message from US Coalition to Free Professor Saibaba

We are excited to congratulate you on your 50th anniversary as an organization. Itʹs been inspiring to see the role that Virasam plays as a beacon of hope for the people in leading the ideological struggle against the dominant imperialist and feudal ideologies in Indian society. Your writings about peopleʹs struggles are an inspiration not only to people in India, but to all the oppressed and exploited masses of the world. Through ups and downs of the struggle in India and internationally you have carried the torch of revolutionary struggle and Marxism-Leninism-Maoism. This has helped to provide guidance and clarity to the people through the various twists and turns, setbacks and advances in the peopleʹs struggles in India and all over the world.
Virasamʹs work clearly demonstrates the important role that art and literature play in the revolutionary struggles of oppressed peoples. The ruling classes of India and those around the world maintain their rule not only by economic domination and repressive force but also by ideological means. In struggling against the oppressive ideologies of feudalism and imperialism Virasam is continuing the revolutionary internationalist legacy of writers like Lu Xun and Maxim Gorky. In line with this tradition, Virasam has courageously supported peopleʹs struggles in India and abroad in the face of numerous attacks from the state and right wing forces. Your efforts not only lend strength to peopleʹs movements, but also expose the oppressive and reactionary nature of the state.
Virasamʹs work has been a true inspiration to people in the United States. We in the US Coalition to Free Professor Saibaba hope to continue to engage with your work and learn from your efforts. We will do all that we can to aid you and the people of India in your struggle against attacks from imperialism and Hindutva fascism. This includes working internationally to expose the Indian stateʹs attacks on the people, and the role various imperialist forces play in these attacks as well. We also hope to help by sharing the work and legacy of Virasam with the masses of the US. Your work has been a great help and inspiration in our modest efforts here.
We echo your call:


Long live peopleʹs art and literature.
Down with Hindutva fascism and imperialism.