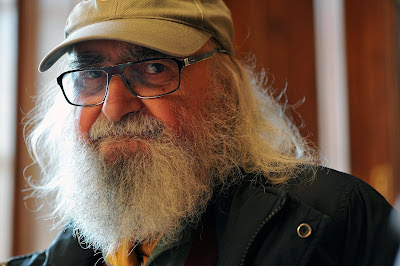 Dear comrades,
a strong and warm greeting to all of you gathered here to keep alive the memory of Comrade Pierre, a great comrade m-1-m example of tenacity and coherence in every day of his life as a revolutionary.
After one year from his death the numerous messages of the revolutionary parties and organizations from many countries are still alive in us, this is obviously not a case:
Comrade Pierre was one of the few Maoist comrades who in Europe after forging himself in the French storm of May-June '68 and the years after taking part in the Gauche Proletarienne, when many retired swallowed up in the general reflux of the movement, he held high the red flag of the revolution in France continuing to be linked to the proletariat and to the popular masses of his country but also to the other revolutionary forces that in other European countries faced similar contradictions of the class struggle.
Pierre went through the difficult '80s and' 90s in France in particular and in Europe in general, often alone or with a few other comrades at his side but, despite this, he never lost the confidence of a red future, he founded the PCm France in the early 2000s in the fire of the class struggle and in close connection with the masses. We are very close to today's members of this party more than ever.
In all these years the PCM France, under the guidance of Comrade Pierre, was the only revolutionary party in France, always at the forefront of the class struggle against the French imperialist monopolistic bourgeoisie, marching towards modern fascism, represented yesterday by Sarkozy, Hollande etc. today by Macron;
the PCm France directed by comrade Pierre was the only party in France, together with other Maoist comrades in Europe, that was alongside the proletariat and the popular masses of the French banlieues in revolt in 2005 and in the following years, while the trotskyists, the ml and the false revolutionaries wavered and judged from above the class struggle that unfolded before their eyes.
With this revolutionary spirit the PCm France directed by comrade Pierre fought reformism, the false-communists and the "cybermaoists" good only to publish proclamations on the internet without ever getting their hands dirty in the class struggle.
Comrade Pierre and his tireless comrades fled to the universities, fought the labor law and organized militant anti-fascism.
Comrade Pierre with his practice and revolutionary line has formed the young generation of Maoist comrades who today are part of the PCm France and who continue along this path.
Comrade Pierre and his companions, tireless, were at the gates of Renault, in the streets of the banlieues, alongside the sans papiers just arrived from Italy after a hard struggle led by our party had finally managed to arrive in France to ... start fighting for their rights again, in both countries they found the Maoists to organize them and to direct their right fight!
All of these are facts and not slogans! All of that is the embodiment of the construction of the m-l-m parties in the fire of the class struggle and in close connection with the masses.
The PCM France led by Comrade Pierre was a great example of an internationalist party for all the Maoists in Europe.
Comrade Pierre, has always supported the People's Wars organizing and becoming the promoter of support committees in his country, he was also one of the founders of the International Committee for Supporting the People's War in India to which he made a huge contribution in a creative way, participating at all its meetings until the last one held in September last year a few months before his death.
This and more was remembered in many messages the day after his death, today our message is not merely commemorative, but a tribute to Comrade Pierre and the party he founded. We miss Comrade Pierre and all his revolutionary work and all of that is missed so much in Europe, so we reaffirm the need to continue on his way to continue to build what the comrade has already started to build:
-          The battle for unity in Europe between the existing and under construction mlm communist parties, today undermined by right-wing opportunism but also by new subjectivist deviations that try to overturn Marxism-Leninism-Maoism and deprive it of its role as a blunt weapon of the working class to build its revolutionary party in the fire of class struggle and in close connection with the masses.

-          The battle for the affirmation of real and practiced internationalism and not just propagandized in support of the People’s War and in particular of the People's War in India, on this regard we think it is necessary to give the maximum support giving new impulse to the existing Committee also developing self-criticism and the unitary action among its promoters.
It is also necessary to take advantage of Pierre's revolutionary experience in the mlm organization in which he took part in the '70s: the Gauche Proletarienne, we believe that this experience should be even better explored in the service of the construction of mlm parties and the revolution in Europe, in the wake of this path traced in part by the class struggle in our countries it is possible to continue the journey towards the Revolution, not applying subjective and mechanical easy recipes.

Comrade Pierre is alive and fighting with us!
Long live the PCm France founded by comrade Pierre!
Forward in the construction of the m-l-m parties in Europe in the fire of the class struggle and in close connection with the masses!
Develop proletarian internationalism, from the womb of the European imperialist countries to support the ongoing People's Wars!