ICSPWI : Call for 28th july day of information,action, solidarity for freedom Varavara Rao,Saibaba and all political Prisoners in India! 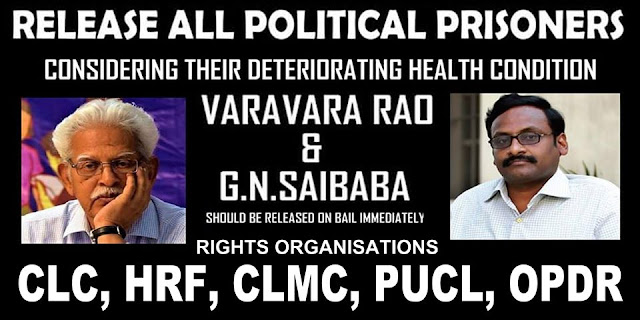 The pandemic is expanding in India. It is the third country in the world for contagions, after the US and Brazil. In the last hours, there were 30,000 infections, the total cases are 1,000,000 and the deaths are 24,000. The most affected states are Maharashtra and Tamil Nadu, followed by Karnataka. The new lock-down ordered by the fascist regime affects 12 states, including Bihar. They are the poorest states. Bangalore, which is the most developed technology center in India where the headquarters of Microsoft, Apple and Amazon are located, is also hit. More than 3 million workers have lost their jobs and are going back to their villages.
The health system in India shows all its backwardness for such a large mass of population and the absence of any real health care.
The Communist Party of Maoist India has been fighting since April to defend the conditions of the masses. The Central Committee spokesperson defined the corona virus a "biological weapon" that has its roots in imperialist policies, requested that at least 10% of the GDP is allocated to the food and health of the masses; denounced how the Modi government had not hesitate to continue the pro-imperialist export of drugs to the US, despite the dramatic needs of the Indian masses.
It is in this context that a drama in the drama is that of political prisoners who, in addition to being targets of the government's fascist repression, risk their lives and health in the regime's jails.
The PCI(Maoist) has called for the immediate release for Varavara Rao, a revolutionary intellectual and artist, wellknown and appreciated by the Indian masses, for Prof. GN Saibaba, eminent figure of the revolutionary democratic opposition to the Modi’s regime and the Indian system subservient to imperialism.
The struggle against the repression and for the liberation of these political prisoners is part of the resistance of the people’s masses in struggle, and at the same time it is part of the exposure of government's policies which uses police force, even the lock-down, against the masses and does nothing for the safety of doctors and health workers.
For this reason it is necessary today more than ever to condemn the Modi government, intensify solidarity with the Indian masses in struggle and arms, extend the campaign for the immediate release of Varavara Rao and GN Saibaba in all countries.

The International Committee in Support to the People's War in India (ICSPWI) has always been committed to this battle and today urgently calls for a new stage of mobilization. Beside the repression of the aforesaid intellectuals an impressive number of militants, teachers, students and artists, members of democratic organizations are targeted; State terrorism is implemented against the press and opinion freedom, in a country where the regime adopts racist and discriminatory laws, such as the latest Citizenship Act, affecting millions of Muslims.
The pandemic also turns prisons into deadly traps.
Therefore, the ICSPWI calls for a new international day of information, action and solidarity, on 28 July, a day on which the vast action of the Maoists and people’s war fighters also develops as part the week of the martyrs of the revolution.
The ICSPWI endorses the many documents circulating in India and around the world in support of this struggle.
Over 130 renowned intellectuals have signed a call complaining that the deteriorating health conditions of Prof. GN Saibaba and Varavara Rao and the outbreak of CoVid19 in prisons endanger their lives and urging their immediate release on bail. Similar petitions have been signed in Bangladesh and by groups of Indian PMs.
In light of this, the ICSPWI calls for some immediate actions:
·         disseminate these documents by all means on the Internet;
·         organize a mail-bombing, on July 28, to the international press, the Indian embassies, the foreign and justice ministers of the largest number of governments, the European Parliament and the International Court of Justice;
·         organize meetings, rallies and any types of actions which, spreading messages of solidarity, allow to extend the mobilization front. For this latter task, we specially call all political and social organizations that deal with prison, repression, international and internationalist solidarity.
These are initiatives already underway in some countries in recent months. What is asked on the international day is to concentrate and generalize them, so to develop a protracted campaign aimed to concrete results, during these months marked by the pandemic.