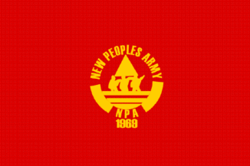 
Thirteen soldiers of the 8th Infantry Battalion-Philippine Army were killed when a unit of the New People’s Army under the South Central Bukidnon (NPA-SCB) Subregional Command employed a command-detonated explosive against them in Sitio Tubod, Barangay (village) Cawayan, Quezon, Bukidnon, on 6 October 2013, around 5:30 PM. Many more soldiers were wounded, while the guerrilla unit implementing the offensive action suffered no casualties.

The 8th Infantry Battalion troops were on combat mission from Kiranggol, San Fernando, to bolster the distressed force of the Butsoy Salusad bandit group in the wake of the recent NPA attack. The Red army had thoroughly monitored their exit route towards Quezon, Bukidnon.

An NPA team swiftly took position and set up a command-detonated explosive in a favorable spot along a road the 53 reactionary soldiers took by foot on their way home. The advance team headed by Nonong Salusad met a barrage of gunfire and a grenade lobbed by the Red fighters, immediately followed by the detonation of the explosive device right on the very spot where the main body of the reactionary troops took cover at the onset of the firefight. The 8th Infantry Battalion troops, fresh from their retraining course, suffered heavy casualties.

That night, they took Zaldy Dejos, a Barangay Cawayan tanod (village security), by force and ordered him to lead the way for them to the Command Post in Purok Pag-asa, Barangay Salawagan. Barangay officials and Dejos’ family have complained of the reactionary troops’ use of a civilian guide under duress. The residents also complained of the strafing of Ever Ucab, a farmer caught pasturing his carabao near the place of incident. Ucab is yet to recover from the severe trauma he underwent.

Lt. Norman Tagros, 8th IB spokesperson, denies at every turn when confronted with questions by the local media regarding the incident and their casualties. No amount of the 8th IB’s denial can conceal the truth from the eyes of many barriofolk who did not fail to notice the convoy of two ambulances and two military service vehicles secretly parked near the cemetery in Salawagan.

The next day, another striped KIA truck carrying a load covered in tarp was seen coming from the Command Post by residents celebrating fiesta in Salawagan. As is always the case, they deny ever committing violation of international humanitarian law in forcing a barangay tanod to guide their troops and in strafing a civilian. Worst of all, they indiscriminately accused the residents of being NPA supporters and blamed them for the harsh beating suffered by their troops.


The 8th IB’s vain justification of their combat operations in the countryside as a measure to ensure the security of the coming barangay elections is blatantly unconvincing. The fact is they are hell-bent at securing the unhampered small-scale gold mining operations of their cuddled berdugo, Butsoy. Peaceful and orderly conduct of any election can only be ensured without the presence of fascist troops.


Only in NPA base areas can there be a truly democratic election where deception, fraud, vote-buying and terrorism are all non-existent. What exist are organs of genuine people’s government in place of the rotten government presently under the reins of the ruling classes.
Publicado por dazibao rojo en 11:16 a. m.