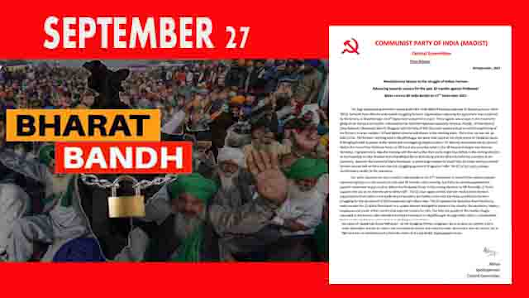 Revolutionary Salutes to the struggle of Indian Farmers

Advancing towards success for the past 10 months against Hindutwa!

The Yogi Adityanath government worried with the Kisan Maha Panchayat planned by Bharatiya Kisan Union (BKU), Samyukt Kisan Morcha and several struggling farmersʹ organisations opposing the agriculture laws proposed by the Centre, in Mujaffarnagar on 5th September conspired to stop it. The program was unique in the movement going on for the past 10 months. It blocked all the National Highways especially Haryana, Punjab, UP and Meerut Zone (Meerut, Ghaziabad, Shamli, Bhagpat) with the help of PAC (the state armed police) to avoid the gathering of the farmers in large numbers. It fixed digital cameras and drones in the meeting place.

The entire city was set up with CCTVs. The farmersʹ meeting held in Mujaffarnagar the place that stood as the main centre of Hindutwa forces in bringing the BJP to power in the centre and in instigating religious riots in UP not only memorises the 62 persons died in the riots of the Hindutwa forces in 2013 but also provides relief to the 50 thousand people who became homeless.

Yogi planned to stop the meeting with the worry that their party might face defeat in the coming elections to the Assembly in Uttar Pradesh and Uttarakhand like in West Bung and his failure to fulfill the promises to the peasantry. However the successful Maha Panchayat in which large number of youth from 22 states and also women farmers proved that no force can stop the struggling peasantry of agrarian India. The CC of our party conveys revolutionary salutes to the peasantry.

Our party supports the call to hold all India Bandh on the 27th September to intensify the militant peasant movement going on in the country for the past 10 months in the meeting. Our Party has already appealed the peasant movement to give a call to defeat the Hindutwa forces in the coming elections to UP Assembly. It firmly supports the call to ʹbe determined to defeat BJPʹ.

The CC once again clarifies that the revolutionary farmersʹ organisations of all states in the leadership of our party will further unite with the Hindu and Muslim farmers struggling for the annulment of the bureaucratic agriculture laws. The CC appeals the Samyukta Kisan Morcha to make success the 25 Maha Panchayats in a unique manner arranged to preserve the country, the peasantry, traders, employees and youth of the country that kept the country for sale. The help the people of the nearby villages extended to the farmers who attended the Maha Panchayat in Mujaffarnagar through 5000 stalls is commendable. We hope this tradition would continue in all the future meetings.

We must remember that branding the farmers as terrorists, turban Naxalites or any such by the evil Hindutwa forces is only to put them behind bars on bureaucratic repressive Acts whenever they feel them dangerous. Our Party appeals to the entire peasantry to fight with dedication facing any number of hurdles and attacks in the movement to annul the agriculture laws meant to serve the interests of corporate classes and force the farmers to death. Nearly 500 farmers died due to many reasons out of police repression, in this movement.

The Hindutwa forces conspired in all ways to disrupt the farmersʹ movement starting from hoisting flags irrespective of the farmers on the red fort on 26th January only for evil propaganda on the movement. The central leaders made a vain attempt to demoralize the organized strength of the peasantry stating the possibility of Corona pandemic. They indulged in attacks on the convoy of the leader of peasant movement Rakesh Tikayat. They conspired in all ways to disrupt the unity of the farmersʹ organisations fighting non-compromisingly. But the farmers are determined.

The centre stated that it is holding back the agriculture laws for one and a half years. This is a very important success of the movement. It will not be surprising if the Hindutwa forces that were defeated in the West Bung elections promise to annul the bureaucratic laws so as to compete without fear in the coming elections. Our party appeals to the peasantry to not believe the deceptive Brahmanic Hindutwa forces and to continue the movement with utmost consciousness until the acts are withdrawn by the Parliament. There are a lot of such traitorous experiences of boasting of Parliamentary democracy. The people must be called upon to not vote to any political party that is not prepared for the annulment of agriculture laws.

The suicides of farmers did not end. This year the conditions indicate an impact of lack of rain on the Khariph and Rabi crops. There is an unprecedented low rainfall in 23 years in Odisha. The central and the state governments are announcing consolation reforms that do not come into practice and affect the lands of the farmers. The farmers of Punjab are affected with additional electricity charges. There is no talk about distribution of agrarian lands to the Dalit and poor people in Punjab.

On the other hand the lands of the farmers are being handed over to the corporate classes for dead cheap rates. In such a situation let us be determined to preserve the agriculture and farmers of the country. The indigenous people of the country are fighting unprecedentedly militant to protect the natural resources of the country. They are condemning the murders and atrocities of the security forces of the ruling classes and struggling with the demand to withdraw the lakhs of police forces in the forest areas and that no police station/camp be set up without the permission of Gram Sabha. The peopleʹs demonstration in Silinger in Bijapur district is going on as a model for the past four months. Our party appeals to the farmersʹ movement to identify with these movements and states that it is not possible to protect the country without a coordination of the movements of the workers, peasants, employees, students, Dalits, tribal, Muslim people and women.

There is unprecedented unemployment in the country. The workers are suffocated with work burden and not assured in life. Oil prices and those of essential goods rose and are testing the purchasing power of ordinary people. Lockouts in the name of Corona pandemic are indiscriminately announced at the cost of migrant labor. Foolish decisions of the governments are only spreading the pandemic.

The people are deprived of minimum medical service leading to the death of lakhs. The country is facing severe crisis in all sectors. On the other hand, as stated by the leaders of Samyukt Kisan Morcha, the rulers of the country put the country for sale in the international market. We have to protect the country. The Sangh clique spoke of cultural nationalism until yesterday but now is aggressively unleashing imperialist economic policies in all sectors in the name of Aatmanirbhar mortgaging the sovereignty of the country.

At a time when the country is completing 75 years of nominal independence, the rulers are celebrating it in the name of ʹAazadi kaa Amrut Mahotsavʹ. As the struggling farmers sloganeer, let us protect our country that is made dependent and put for sale in the international market and make it secular, democratic and self-reliant. Let us fight and win our beloved country from the chains of the big feudal, big bourgeois forces.