Mayday in the FRG

In Bremen, a revolutionary internationalist demonstration was organized this year, for the first time, organized by an alliance of different organizations and groups. After the last year, where the DGB's established Mayday demonstration, the head of the "Union of Police" was allowed to speak, many are done with the yellow unions activity this year. Although the revolutionary internationalist demonstration took place at the same time as the much-known DGB, up to 800 people took part. The demonstration was combative and marked by participants and organizations from different countries, which underlined their proclaimed character. Specifically, participants destroyed and disposed electoral posters of all bourgeois parties on the sides of the demonstration, which made clear the rejection of the masses of the upcoming constituency election and European elections later this month. In addition, a part of the demonstration, which went under a banner with the slogan "The struggle for liberation is international!" chanted the slogan "Vote against exploitation never works! - Boycott the elections of the bourgeoisie!" What was especially clear at the demonstration is that a revolutionary, internationalist Mayday demonstration can only be successful in unification of the proletariat and the peoples of the world. That is why the participation of activists from Afghanistan was so important, with a banner denouncing the actions of imperialism in their country of origin, with the slogan "We are here because you destroy our countries!" At the same time, they called for a stop to deportation to the country, which had been ruined by imperialist aggression so much that many do not want to live there anymore. The first revolutionary, internationalist Mayday demonstration in Bremen was a success, waiting to be further enlarged in the coming years to establish a militant tradition in the city.

Like every year in Berlin there were a lot of demonstrations, from the morning DGB demonstration and many others, for example the satirical demonstration in Grunewald, to the unannounced "revolutionary Mayday demonstration", which went through Friedrichshain for the first time this year.
From the beginning on it was characterized by confrontations with the cops. They did not want to let the demonstration go without an applicant and delayed the start by more than an hour. Like every year in Berlin there were a lot of demonstrations, from the morning DGB demonstration and many others, for example the satirical demonstration in Grunewald, to the unannounced "revolutionary Mayday demonstration", which went through Friedrichshain for the first time this year.
From the beginning on it was characterized by confrontations with the cops. They did not want to let the demonstration go without an applicant and delayed the start by more than an hour.

In the Rigaer Straße the demonstration was disbanded by the organizers but large parts moved on to the announced end point on the Warschauer Straße. Already on the way there were attacks by the cops, which were repulsed. After the pigs managed to split the demonstration shortly before their end point, they attacked it again at the endpoint. This time there were a variety of arrests, the pigs speak over the course of the demonstration of a total of 150. There was also a lot of resistance of the demonstrators, so the front block was formed again and again and the pigs were hit from the sides with bottles. The call for this year's revolutionary Mayday demonstration in Berlin showed a significantly more progressive character than in previous years:
"May Day is the day of the striking women of Latin America, the day of the miners of South Africa, the day of the guerilla fighters of India, Kurdistan and Mexico, the angry tenants of Berlin, the yellow west of France, the opposition to the Turkish Erdogan regimes, the Brazilian antifascists - and many hundreds of thousands more." We welcome this development. We document a video with some impressions of the bourgeois press on the revolutionary first of May in Berlin.

On the eve of May 1, we held a rally in Freiburg Weingarten together with some comrades. There we first distributed flyers to passers-by and then opened the rally with a few words to greet the participants. After our greeting there was first a contribution of the group struggle in solidarity, which develops its work in Weingarten. Afterwards we gave a short speech on the tradition and meaning of the working class day of struggle. Also, the offer of the open microphone was perceived by one of the participants in the event. At the end we played the International and left the rally site in a organised manner.
The next morning, we participated in the anti-capitalist bloc on the DGB demo and distributed first leaflets on our upcoming campaign on proletarian feminism.
Our focus this year was clearly on our action in Weingarten. This was of course not comparable in size to the official demonstration on the following day. Nevertheless, it was important for us to carry them out in order to be able to establish our own tradition in the next few years, which breaks with the stagnation and nightmares of the German left. Large sections of the proletariat are unorganized and have no connection with the yellow unions. In particular, migrants are largely excluded from the practice of trade unions and the political left. This exclusion must be overcome and the progressive elements in organizations integrated into the class struggle. For this it is imperative that we intensify our work in the neighborhoods of the workers. We must have the courage to go our own way and draw a clear line to the opportunists who hold back our movement today.
(This report was first published here)

In Hamburg this year a big internationalist bloc participated under the slogan "proletarians of all countries and peoples of the world, unite!" at the DGB demo from Dammtor station. The approximately 500 demonstrators of the block were composed of various Turkish, Kurdish, Iranian and German forces. Revolutionaries held posters commemorating the Mexican comrade and convinced internationalist Jorge A. Cruz, who fought hardest in the peasants' movement and also as professor at the university. The other sign showed Comrade Luis Armando, who was fighting with the indigenous people of Mexico and was therefore murdered by Mexican paramilitaries in April. At the closing rally, there were some hollow threatening gestures of fascists, who had already participated in the demo. However, it was made clear by a certain appearance of various anti-fascist forces that they were not wanted. May Day is the day of our class and the proletariat has no fatherland!

In Cologne, an internationalist bloc was also formed at the DGB demonstration, in which various organizations participated. In Magdeburg, a block of revolutionary comrades took part in the DGB demonstration in the morning, with an offensive appearance and loud slogans, the act could be given a class-fighting character. In addition, information material such as the May Day newspaper designed especially for the day could be spread among the people. In the afternoon, a separate demonstration with about 200 participants was conducted. 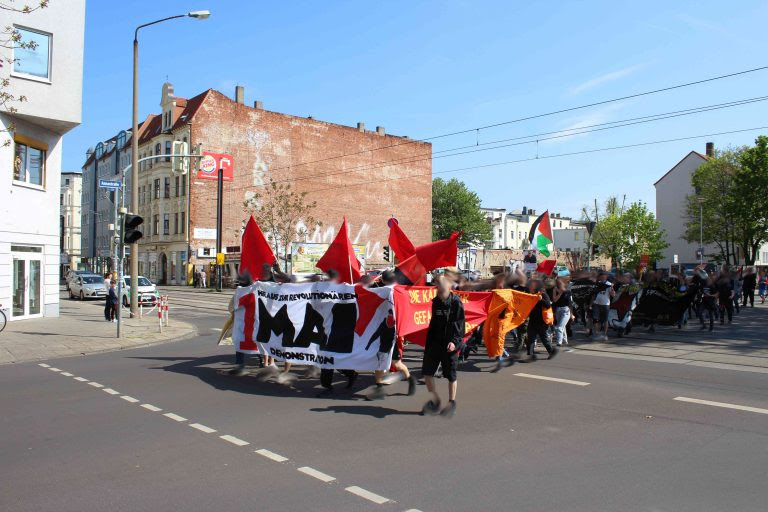 In Nuremberg, Turkish comrades participated in the Mayday demonstration with over 3000 participants. There was also mobilized for the central Kaypakkaya event on 11 May in Stuttgart. In Wuppertal they participated in an internationalist block.

In Stuttgart, about 1200 people took part in the revolutionary First May demonstration, which was also quite combative. On the demo route flares and smoke were ignited, the house of the economy was thrown with paint bags and it came to arguments with the police. In the following days we will publish an article about the international Mayday.