The communist parties of Britain (CPB) and Ireland (CPI), recognising the different situations they struggle within and the forces at play during the course the EU elections, have discussed the solidarity that exists between the parties on the question of nature of the European Union and the consequences of continued membership. In particular the CPI sends solidarity to all those in Britain who, over the weekend of 18-19th May and in the run up to election day on 23rd May, are participating in the Boycott campaign.
In Ireland, the CPI calls for a Left vote and in Britain, the CPB calls for a boycott. The aim of both being to break the power of the transnational monopoly capitalists and the anti democratic EU. This sham parliament is a veneer, a pretence that there is or can be democracy within the EU superstructure, peddling the illusion that change can be brought about through using these imperial structures. Its representatives travel the world lecturing the natives on the benefits of white European ʹdemocratic values.ʹ This is a ʹparliamentʹ whose president has twice supported attempted coups in Venezuela and the overthrow of that countryʹs democratic government.
In the case of Britain, there is a pressing need to ensure that the majority decision to leave the EU is implemented. The dominant section of the British ruling class and the European Commission have striven to frustrate that decision. They are determined to spin every way they can to extend the leave process, make it as difficult as possible to exit, and when the opportunity arises, to force a second vote on a reluctant population.
In Britain the principal campaign demand is for citizens to stay away from the elections. It also sends a strong message from the working class to MPs, the City and the dominant ruling class forces expressing the dissatisfaction and opposition to parliamentary manoeuvring to negate the peopleʹs demand to leave. The boycott will be an opportunity for the working class to punish them for their anti-democratic strategies.
In Ireland the election is an opportunity to campaign against strengthening of the EU integrationist forces who wish to cede more powers away from national bodies, such as Dáil Éireann. The campaign will expose how EU trade agreements have been and are causing huge economic damage to poor countries, robbing the people of their resources. The EUʹs strategy is to strengthen its strategic military capacity through PESCO, strengthening the imperialist nature of the EU and the projection of its global reach, strengthening its capacity to act as a policeman in trade and resource wars.
The Irish people have first hand experience of this strategy, twice they have been forced to vote again after rejecting treaties promoted by the EU and the Irish establishment. The last one was when they were forced to re run a referendum on the Treaty of Lisbon in 2009.
The CPB and CPI urge working people in both countries to recognise their class interests and the bonds of solidarity between them. To note too, the class enemy in both countryʹs that seeks to divide and rule.
It is clear that a strong vote for the Left in Ireland, for those who defend national democracy and the peopleʹs sovereignty, puts pressure on the government of the Republic. Both parties pointed out that neither the British establishment nor the EU care for the future of the Irish people but rather have misused the Irish national democratic question as a means to thwart the wishes of the majority of people within Britain, to leave the EU.
A boycott in Britain, will limit the vote to the right wing Brexiteers and racists in UKIP seeking to ride on the back of popular feeling for the Brexit to be implemented.
Both communist parties have been long-term campaigners against the growing centralising power of the EU commission and European monopoly capitalism. Now one country has voted to break free. This act is a source of strength and inspiration on both sides of the Irish Sea. 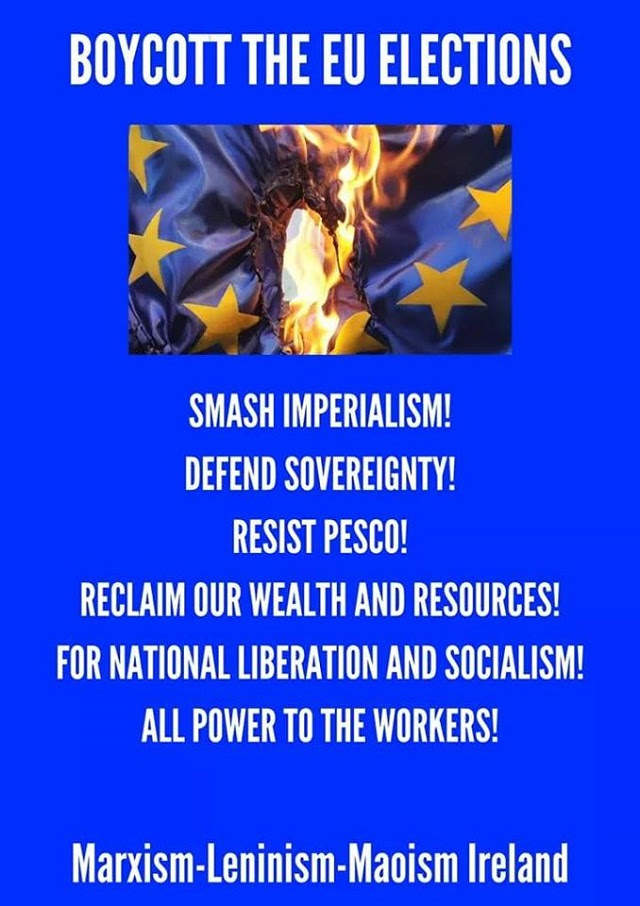 Can you tell us the names of the two parties, comrades?