INDIA: COMMITTEE FOR THE DEFENSE AND RELEASE OF DR GN SAIBABA. 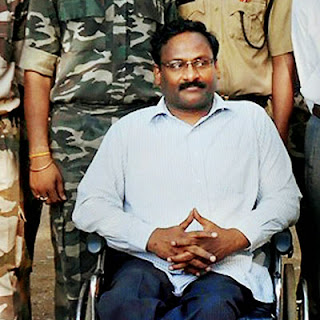 COMMITTEE FOR THE DEFENSE AND RELEASE OF DR GN SAIBABA

It is shocking to hear the news that Dr. G.N Saibaba’s application for permanent bail was rejected today by the Nagpur Bench of Bombay High Court. What is further appalling is that the High Court has also dismissed Saibaba’s interim bail order (Criminal Application No.785/2015), that was issued by a division bench led by the Chief Justice of Bombay High Court Justice Mohit Shah along with Justice Shukre on 30/06/2015 which granted him interim relief which in turn was extended by the same division bench till 31st December 2015, to avail treatments for his serious medical conditions. It was only after many democratic voices raised an alarm about the rapidly failing health condition of Saibaba, that the Bombay High Court intervened on the basis of a letter written to the Chief Justice by an activist named Purnima Upadhyay. The letter, which was suo moto converted to a Public Interest Litigation (PIL) by the High Court, resulted in Dr. Saibaba being granted temporary bail. Interrupting his ongoing treatment, the new judgment by a single judge of the Nagpur bench of the Bombay High Court has ordered Dr. Saibaba to surrender himself to the Nagpur prison within 48 hours! The order further states upon failure to do so, he shall be arrested by the police.
Dr G N Saibaba—a wheel chair bound, 90 percent disabled professor teaching English literature at the Ram Lal Anand College in Delhi University—is currently undergoing treatment after he was released on bail on medical grounds. The highly inhospitable conditions of the notorious anda cell of the Nagpur Central Jail had further deteriorated his multiple health problems. The extreme insensitivity of the prison authorities clubbed with a vengeful administrative apparatus coordinated from the Centre had nearly ensured that the medical complications had become life-threatening. This is demonstrative of the level of cruelty with which a differently-abled person is treated in the prison!
After his release on temporary bail, Dr. Saibaba has been undergoing treatment in various hospitals in Delhi for multiple health problems pertaining to the heart, spinal cord, kidneys, gall bladder and the left shoulder (which had became totally dysfunctional in prison owing to muscle death). The treatment that Saibaba is being subject to is far from being over and needs to continue under specialist doctors and can happen only in Delhi. The doctors who were treating him have unambiguously stated the same. In this situation the cancellation of his bail and forcing him back to the same hostile prison is going to seriously affect his health conditions, probably beyond any recuperation. The rejection of bail in this situation therefore is unacceptable and inhuman.
But more than being just inhuman and insensitive, what this yet again lays bare is the intolerance of the Indian state towards any voice of dissent. The fact that it can go to the extent of yet again putting a ninety percent disabled professor back in anda cell after being released last time from near-fatal conditions is deeply disconcerting. The well-designed framing and branding by the corporate media, the sensationalized police raids at his warden’s flat in Delhi Univ., the abduction of Saibaba by the Maharashtra police, his subsequent incarceration in May 2015 were all part of a desperate attempt at silencing dissent. It is a part of Indian state’s brutal war on the tribal people in Central and Eastern India codenamed Operation Green Hunt. It is aimed at silencing one of the most prominent and effective voices against Green Hunt and the Indian state’s anti-people policies introduced under the garb of “development”. The current interruption in his medical treatment, after pushing him to the verge of death inside prison, only shows the desperation with which the state wants to silence such voices of dissent.
The glaring instances of state’s fascist tendencies is yet again laid bare when the same High Court judgment that cancelled Saibaba’s bail petition also ordered proceedings for criminal contempt to be initiated against Arundhati Roy for her article titled Professor, POW against GN Saibaba’s incarceration that was published in Outlook magazine on 18th May, 2015. The Order has issued notice to the author for action for contempt of Court, returnable on 25.01.2016. We condemn this outright throttling of freedom of speech and expressions.
Finally, it is rather disturbing that while all the five other co-accused in the same case along with GN Saibaba has already been granted regular bail, a ninety percent disabled professor is being denied the same. We condemn this rejection of permanent bail of GN Saibaba and the quashing of his interim bail in no uncertain terms and appeal to all progressive and democratic people to immediately stand up to such a travesty of justice. We must in unison ensure by any and every means possible that Dr. GN Saibaba is not incarcerated once again. At a time when fascism is tightening its tentacles and choking our voices, such occasions as this demands that we show the limits of our tolerance towards such injustice being meted out in the name of law under the garb of democracy.
Sd-/
Hany Babu M T
Associate Professor, University of Delhi
Publicado por dazibao rojo en 12:56 p. m.