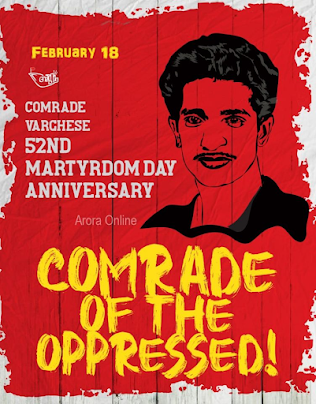 Comrade Mao has said, death is a quite natural thing but living and dying for people is greatly worthy.
Comrade Varghese worked and got Martyred for the marginalised people!
Comrade Naxal Varghese who was CPI(M) Kannur District Committee Office secretary was sent to Wayanad by CPI(M) district committee to strengthen the peasant movement. He along with PS Govindan was working with All India Kisan Sabha led by AKG in Wayanad. He understood that CPI(M) was along with the feudal savarna landlords and Bourgeoisie who exploited Adivasis and Dalits! After politically criticising CPI (M) for its Parliamentary Cretinism, Varghese and PS Govindan joined CPI (ML), the Naxalite movement.
It was CPI(M) who protested against the fake encounter of Varghese and the same CPI(M) killed 8 Maoists in the last term of Pinarayi Vijayan!
Remembering Comrade Varghese on his 52nd Martyrdom Day Anniversary!
Publicado por dazibao rojo en 10:54 p. m.