NEPAL: Election Boycott Campaign and the Role of the Red Youths 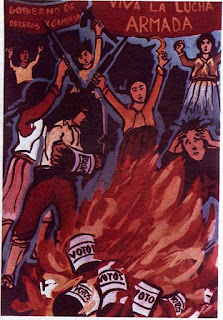 We have the right to boycott election as others have the right to take part in it. Currently the reactionary government is scheming the  psychological terror that they are going to deploy the army in the election. We all know former king Gyanendra also had declared general election  at that time.  And we know it too that the revolutionaries have gained the experience of how to foil this type of elections.  We have the leading team of matured  and revolutionary  leaders and we have  the organization of youths like NVPV, where most of the former PLA commanders and cadres are united. They are prepared to complete their course of sacrifice in any time and action.

The   main thing is the ideological question, which leads the oppressed people in the correct direction. We have a glorious history in this regard. When we waged the People's War, we had just a small team of people's volunteers, but later on,  we had seven division of PLA.  Similarly,  in the beginning we had only one home made gun and later on, we gained  the experience of modern rocket launcher. As Comrade Mao has mentioned that the decisive factor is the party line. Yes, the decisive factor is  the revolutionary line, revolutionary spirit and the will power, not the number.

To fight for the safeguard of the national sovereignty and to achieve the goal of New Democratic Revolution is our motto. We know  the government forces along with all types of revisionists and opportunists, including  UCPN (Maoist),  will come out against  our mission and we are fully ensured that we can overcome all these obstacles. As Comrade Mao has mentioned in his article “The Orientation of the Youth Movement”, “Young people, full of vigor and vitality, are in the bloom of life, like the sun at eight or nine in the morning.”  Yes,  The National  Youth People's Volunteer means the organization of the revolutionary youths,  who are ready to face each and every challenge loaded by the reactionary forces, inside the country and abroad.   History has taught us how to fight against reactionaries and  the opportunists.

CPN-Maoist has put out  the issue of  “High Level Consensus”. This must  be taken with seriously. Not to take this issue seriously  means  to call for a new confrontation. In fact, election without national consensus means declaration of war on the people.  Second phase of election boycott campaign is going to be concluded  and  no doubt, the third and final stage  will take a new step–a new leap. Then it will not be the matter of surprise that the colour of  Red t- Shirts will be  changed into  the  “Green Shirts”. The youths of the National  Youth People's Volunteer,  are waiting for their  commander's direction. It must be kept in mind that it is not  the period of 1996,  now it is 2013.